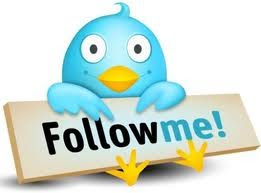 I promise I'll think of something (t)witty to say one of these days.

Meanwhile, guess who has almost 25,000 followers in only two days?

The missing snake from the Bronx Zoo.

I'm not following a snake on Twitter (or anywhere for that matter), but I've got to say, those are some funny tweets.

@BronxZoosCobra
Forgot DWTS is tonight! Someone DVR it for me. Want to watch Ralph Macchio go down for what he did to Cobra Kai Dojo.

@BronxZoosCobra
Just FYI, I've had it with Samuel L. Jackson too.

@BronxZoosCobra
Holding very still in the snake exhibit at the Museum of Natural History. This is gonna be hilarious!

Badass of the Week 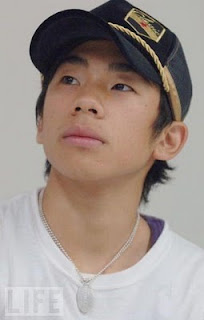 I'm talking about another Japanese man and he has NOTHING to do with skating, thank you very much. 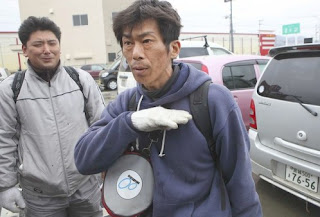 His name is Hideaki Akaiwa and he's featured on the website Badass of the Week, which I found courtesy of The Daily Dish.

It is reported that on the day of the earthquake Hideaki Akaiwa threw on scuba gear, jumped into a TSUNAMI, dodged debris, found his house & his wife, & saved her.

Wow. That's the kind of story I liked to hear about heading into the weekend.

Excuse me, Miss Ice Charades, does it count if someone else is doing the swearing?

Hell, yeah. Click on Badass of the Week, if you love swear words salted and peppered through your true-life action hero stories.

How the fuck Hideaki Akaiwa got a hold of a wetsuit and a set of SCUBA gear is one of the great mysteries of the world. I'm roughly twenty hours into Fallout 3 and I'm lucky to come across a fucking vacuum cleaner in that godforsaken post-apocalyptic wasteland, yet this guy is in the middle of a real-life earth-shaking mecha-disaster and he's coming up with oxygen tanks, waterproof suits, and rebreather systems seemingly out of thin air. I guess when you're a truly unstoppable badass, you, by definition, don't let anything stand in your way. You make shit happen, all the time, no matter what.

Have a hell of a weekend everyone - I'm off to figure out how to Tweet!
Posted by Ice Charades at 4:56 PM No comments:

What Should She Wear? 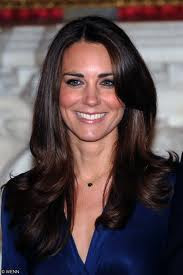 I know this is not the first article to ask what Kate Middleton should wear for the Royal Wedding, but I thought I'd get my say in before we are entirely sick of it.

Aren't we all a little sick of it already?

Poor girl, not her fault. Blame folks like me.

So, like I said, I'm going to have my say, and yes, boys and girls, I'm going there. Again.

Kate, of course, is already on the other side of the pond, so shipping charges from the rehearsal headquarters for Holiday On Ice in Bern, Switzerland, shouldn't cost too much. Plus, as the future Queen of England, she's got some quid hanging about, eh?

So, from the Holiday On Ice Used Costume Warehouse, I say she could get herself a dandy dress. I'm sticking with white dresses, but something kind of fun too, don't you think?

Here are my top 5 choices - go ahead and pick a favorite.

How about this one? 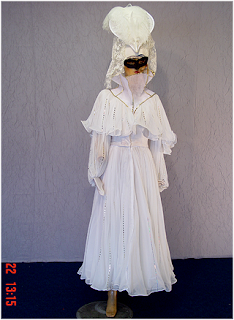 A little dowdy and the headdress and mask scream Venetian masquerade party, but it could work. Or this one? 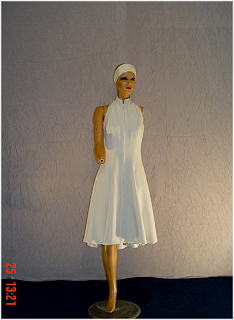 A bit plain, I know. Hey Ice Charades, she's not going to a tennis-garden party, how about something with more pizazz.

Okay, okay, what about this one? 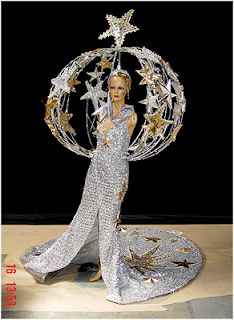 Splashy, don't you think? Who needs a caketopper when you can wear it yourself? If she wants another flashy option, how about this? 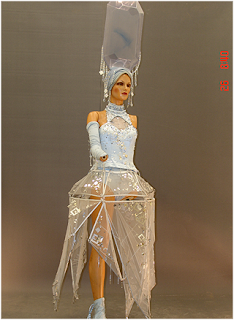 Uh, Miss Ice Charades, that looks like a jellyfish or a condom on her head, she can't wear that.

I know, but I said fun and just for fun comes the all-time favorite costume. Must be sold out by now, but here you go. 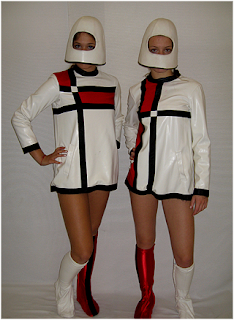 Kate's a modern girl. She could pull it off.

So let me know what you think ... and I'll let you know what, if any, juicy gossip or behind-the-scene tidbits I hear about because I have a friend who's invited to the wedding!

That's right, baby. He's invited, he's excited and he's going. This is a good friend of mine going back fifteen years and he's grown up to be the Ambassador to England from a small, sleepy country in Central America. As an ambassador, he probably won't be posting any crazy candid snapshots to Facebook, but maybe someone else will. We'll see ...
Posted by Ice Charades at 1:24 PM 5 comments:

You may know her as the figure skater/author from All The Sunday's Yet To Come ...

You may know her from her latest book As Good As Gold ...

Now you should check her out Kathryn Bertine's newest gig as senior editor for ESPN W. By the way, that "W" stands for women.

Her story is an inspiring one ... and now she's going for the summer Olympics in London. As a cyclist. If you ever needed a reason to get your butt off the couch, to grab either of her books and go back to the couch, to read about how much endurance she has. A lot. After reading As Good As Gold, you may feel like taking the old Schwinn out for a spin afterward or you may feel like you need a nap.

But either way, you'll enjoy her books.
Posted by Ice Charades at 10:58 AM No comments: 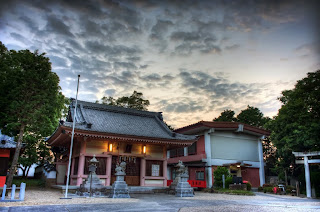 I'm sad to see the devastation and praying for the people of Japan.

The sequel to Ice Charades... to be released in 2012, takes place in Japan, so Japan is on my mind a lot. It is all at once a beautiful, whacky, sacred, humbling, frustrating and funny place to write about.

My girlfriend, who lives in Tokyo, called me yesterday morning ... before the earthquake, just to chat and I used the phone call to go over some questions I had about Japan.

When I woke up this morning and saw the news, I did not want that to be my last phone call with her. Good news: she just called me via Skype to say she and the family are okay. I haven't heard back from other friends, but Tokyo was spared the brunt of the quake, so I hope they are okay.

Japan always knew "the big one" was coming and I don't know if that was it, but boy, I hope there are no more. 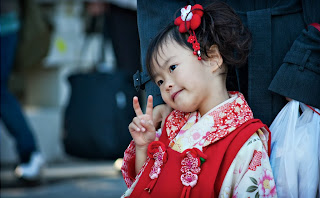 And, by the way, if you like the photos, you should check out Japan Dave's website. It is filled with gorgeous photography. I subscribed and receive a photo in my inbox everyday.
Posted by Ice Charades at 9:45 AM No comments:

In Panama, Carnaval is a big deal - a whole week off. This is what the celebration can look like in the city, so we are heading the mountains. So is half of the country.

We've been told the town we are going to has a "small" celebration. I don't know what that means, but I hope we can see some floats like this. 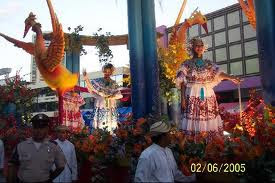 The women on the float are wearing the national dress called the "Pollera" - which would make an easy production number in any ice show. Would love to have one of those dresses for Halloween or some other costume party, but the word is they run up to $10,000 a piece. They're hand-sown. Yikes. 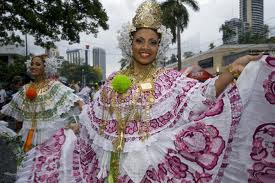 Maybe I can find something a little more traditional like this number below. It looks like the finale costume from Atami, Japan '90-91. Put some skates on her and she's a deadringer for Tamara Sharp. 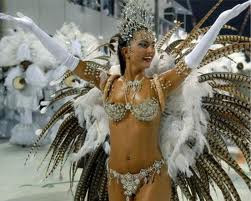 I know in Trinidad, they allow costume rentals for Carnaval, but I don't know about Panama. If I had a few pinacoladas first and could still duplicate my impressive 30 minutes of stomach-sucked-in at a stretch, maybe I'll give some costume a go.

Of course, I could have ordered one straight from Holiday On Ice's costume collection. Cue the one-legged wonder in this stunning red "Carnival" costume. 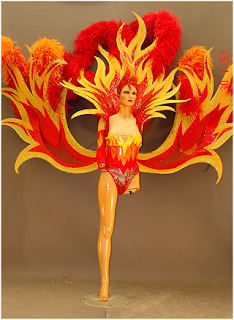 Nice, huh. Although I don't think that would fit in the car.

But no matter what, I hope to do some kind of celebrating. That means I may not be able to blog next week. Not sure about my wi-fi, so I'll check in next week after the family gets back from vacation.

I hope you all have a great time for Mardi Gras - Spring Break - March Madness - or whatever you like!
Posted by Ice Charades at 6:37 PM 2 comments:

The Year I Swore

Well, that's how it was supposed to be. My New Year's Resolution (NYR) to swear more and let some steam off is not going very well.

And now my parents are visiting ... I can't swear when they're around.

A while back I stumbled upon this brilliant little blog post by metalia and it drew me in.

Then I thought I could write about the "Year I Swore" - but now I may need to replace it with some other habbit, hobby or catchy title. Anyway, I've posted part of her post below, but you should really check out her whole blog.

You GUYS. I'm Writing a Book.* 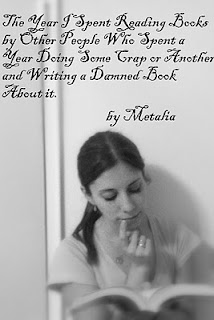 So, the book. Oh, my friends, the WHIRLWHIND! The LIGHTNING CLAP THAT WAS!

There I was, strolling the aisles of my bookstore, attempting to find something new, and it seemed that everywhere I turned, there was another memoir about someone doing SOMEthing for a year. Living biblically for a year! Living like Oprah for a year! Not shopping for a year! Living with subway dwellers for a year! Again, I made that one up, but you just KNOW some hipster right now is all "YES! And I shall call it From PBR to Panhandling for Nickels: My Year with the Mole People."

And like that, my inner book found ME. My friends: I have decided to write a book about spending a year reading books by people who spend a year doing something.

Each of the books, I've realized, follow a similar formula. How hard could it be? OBSERVE:

Step 2: Write about how great it is, and how your soul NEEDED this.

Step 3: Uh oh! Crisis of some sort! Will you finish on schedule? Do you need to? DO you WANT to? Is it worth [insert sacrifice here]?

Step 5: Talk about the life lessons you've gained from this yearlong experience.

See the entire post with a second cover and bonus picture here.

And if you want a laugh, guaranteed, go to her blog. Check out the latest on Oscar Fashions. In a word: tinfoil.
Posted by Ice Charades at 10:48 AM No comments: