... or those that are thinking about it.

Boy, would I love any excuse to go to Sun Valley. For those that can make it in August, I'm sure the Annual Meeting won't disappoint. For anyone wanting to get the scoop, this would be an excellent place to test the waters, meet those already in the biz, and watch some great skating.

We welcome all of our current and perspective PS members to Sun Valley, Idaho this summer for a fun and exciting weekend!

The weekend will include presentations from board members Sylvia Froescher, Craig Heath, Frank Sweiding, Scott Irvine, Lisa-Marie Allen, Ashley Clark, Jed Hopkins and many others. The seminars will be both on and off the ice about show skating and audition tips from the producers themselves. This seminar is very beneficial and informative for any skater, professional or not.

There will also be an open meeting regarding member benefits that anyone is welcome to attend. If you have any suggestions for PS, this is the time to be heard. Also, anyone that is attending this meeting will get to participate in judging the top five skaters in our first ever Virtual Professional Competition.

If these aren't enough reasons to come and visit us in one of the most beautiful places on earth, than I don't know what is? Did I mention there is an amazing ice show on Saturday night as well? Come and cheer on the skaters and have a weekend you'll never forget, in Sun Valley!

Go to www.sunvalley.com for lodging or look online for cheap Sun Valley housing.

Posted by Ice Charades at 4:07 PM No comments:

Skip to the dance scene or neither of you will get any sleep that night.
Posted by Ice Charades at 10:51 AM 2 comments:

I've always said that no matter how tired you were, Smooth Criminal would pick you right back up again.

He made some great music for skating.
Posted by Ice Charades at 8:42 PM No comments:

The Day I Was A Flower 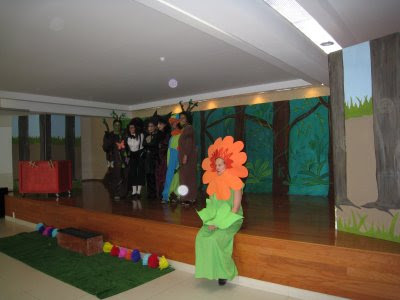 Remember a while back when I mentioned I went to play practice at my daughter's school and everything had to be in Spanish and I felt mentally retarded?

Perhaps I didn't put it so bluntly back then. Or maybe you remember me ranting about the mothers putting on the play for the kids, which seems totally insane to me, but whatever.


But, I did it. I was the stupidest looking flower ever in the play with seven lines of dialogue all in Spanish. That meant if I forgot any line, I would not be adlibbing very easily.

Were they laughing with me or at me?

Okay, Ice Charades, big deal, so you were in a play, does this have anything to do with skating? 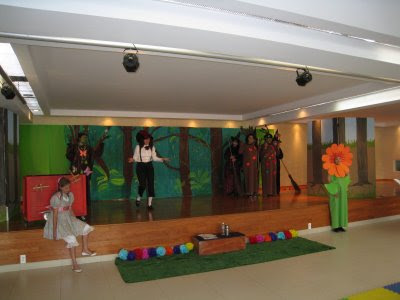 Why yes, thanks for asking. I must say my flower costume was the most embarrassing thing I've ever worn ... but other costumes in my skating past were close.

The candy mint costume comes to mind. Dressed up in a giant mint candy (think circular sandwich boards across the body) and celephane wrap shooting out from my shoulders and knees. We couldn't even skate in them because the candy circle went down past our knees.

In my skating life, I've also been a penguin, an Eskimo, an Indian teepee, a snowflake, a piece of cake, a cat, a Japanese TV villian - that was so much fun! - a mouse, a tree, two more flowers, and a pinball flipper. Have I forgotten something?

There is no diginity when you need a paycheck.

So, I guess what I'm getting at is that I've had my share of embarrassing costumes, so what was one more.
Posted by Ice Charades at 8:06 PM 3 comments:

So You Think You Can Skate?

This video is making the rounds with some of my skating friends.

Fantastic Footwork! She could lead a session on creating your straight-line footwork for your program.

But I think she needs a coach to help her with her presentation. Chin up girl - and I mean that literally.
Posted by Ice Charades at 1:15 PM 1 comment:

Okay, Ice Charades, what does this have to do with skating?

Not much, I've got to say, but thanks for asking.

Maybe you've heard of him before, but if not, check it out ... www.GoRemy.com

I know this is a stretch, but it's also Friday, so if you need something to help waste hours at the computer until it's time to leave work ... here you go.

Stay with me on this. I got a link to one of his videos, via You Tube, and some 17 videos and 2 hours later, my daughter and I have made it through most of his repertoire.

Does this guy still have a day job?

A lot of his videos have the local flavor of the Washington DC Metro area, so Required Elements is going to love it, but the rest of you may not get all of the jokes.

My personal favorite is the Tabbouleh Song. It's kind of what I had in mind when I responded to Axels, Loops, and Spins about a Bollywood number for a pair or dance team to skate to. Of course, you would have to take out the lyrics. But the instrumental is great.

I also like the Hockey Song. Again, it's a local song all about the Washington Capitals. But with McDonald's, Turbo Tax or 2% Milk, there is probably something for everyone.

So, finally, getting around to skating ... Let's see if we can get him to do a figure skating song.
Posted by Ice Charades at 6:24 PM 1 comment:

Looking for a Principal!

Arena International is looking for a Principal Girl to head to St. Louis .... oh wait, no it's San Luis Potosi in Mexico for August.

Just think, when you're done with the show, you can head to the beach for a nice, inexpensive vacation in September.

If you don't have the Arena International info, head to Facebook, and look up the group there.
Posted by Ice Charades at 11:00 AM No comments:

Okay, the big question for me goes back to Michelle Kwan. Will she come back? Will she be the TBD in Skate America? Would she take up a valuable spot in Vancouver?


Since she has left the door open, you know she's weighing her options. I wonder if she shouldn't put in a call to other skaters who have done that. Aaron at Axels, Loops, and Spins mentioned skaters like Irena Slutskaya and Todd Eldredge and Jumping Clapping Man went into more detail back in March. Would Boitano or Witt tell Michelle to jump in (no pun intended) like they had in Lillehammer? Or would they say don't risk it.

Between the posts and the comments I can't add much. Well, okay, one thing, don't forget about Gordeyeva and Gringkov in Lillehammer. Of all the gold medals that came storming back to compete, they were the only ones to repeat.

Well, while the bloggers have been discussing all the finer points of the GP selections, I was busy watching the final stages of the Giro d'Italia. Italy's version of the Tour de France. I'm a huge fan of cycling - I blame my husband for that - and I can boast about seeing every stage of the Tour de France since 2005. Watched the tours even without Lance Armstrong riding.

But speaking of Lance, he was riding in the Giro this year. Came in 12th. Planning to ride in the Tour de France next.

Okay, Ice Charades, this blog is about skating and your off on some bike trail. Are you going anywhere with this?

Why, yes. Thanks for asking.

It's largely the same discussion about Lance as with Michelle. Why did he come back? Is he setting out to win the Tour or just enjoy the scenery this time? Is he crowding out to other GC riders on his team?

In Cycling, a team usually concentrates on one rider being the GC contender (General Classification) and the rest of the team - the domestiques - works for their GC guy. That's a different philosophy than skating, but ... Lance worked as a domestique (French for servant) in the Giro to help out his teammate Levi Leipheimer. It could be that Levi will have to return the favor for the Tour. There is another rider on the team, Alberto Contador, who is probably the best rider on any team right now. Will he work for Lance or the other way around?

Seen here in the blue and yellow.

Maybe there was some bartering, like this, in the GP selections as well. I don't doubt that Lance (maybe Michelle too) had a seat at the table when discussions started.

Right now, it looks like Lance is back riding for the thrill of competing - since he's a long shot for the Tour. We'll know at the end of July if he was able to do more. Maybe Michelle should give him a call.
Posted by Ice Charades at 10:45 AM No comments: