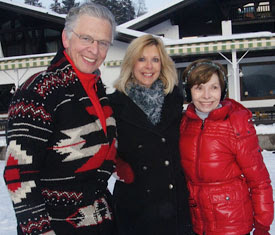 ... and good friend of Ice Charades. Someone I have always looked up to. That's her standing between Willy and Cathy in a Bietak sandwich.

And here she is featured in this article by Louis Elfman for IceNetwork, proving that you can still have great jobs within the industry when you are done performing. Although the odds are tough. For every thirty or so chorus skaters there is one choreographer, maybe an assistant. There is usually just one producer.

You do the math!

Posted by Ice Charades at 3:47 AM No comments:

CASTING FOR "CIRCUS ON ICE" in BOULIONE, FRANCE

Looks like fun, only 30 minutes outside of Paris. Wish I had the time (and energy and jumps and/or spins).


Nanterre (30 minutes from Paris by RER).

Chorus skaters not from Paris or from other countries:
2.000 euros net for the period plus travels and Hotel with breakfast.
12 working days.
Real Ice.
Send Photos and resume.


Thank you very much.
Kind regards

Posted by Ice Charades at 3:47 AM No comments: 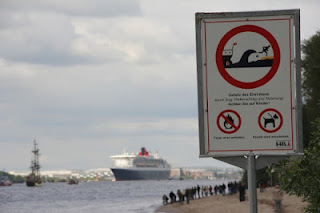 A friend of mine is going on a cruise soon, but is scared that she will be seasick. It's on a big ship and my question is to the skaters that skate on a cruise ship day in and day out ... how does one keep from getting sick?


This weekend it was the Harbor Birthday for Hamburg ... a big event for the city. I think it's Hamburg rival to Munich's more successful Oktoberfest. Hmmm, big boats vs. big boobs and beer steins - which do you think would be more successful?

Anyway, Hamburg has the harbor birthday and the Queen Mary 2 rolled into town. It's big. Although Germany's Aidasol (on the left with the red lips) is pretty big too. 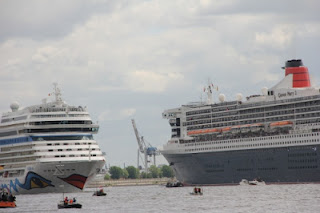 Cruise ships have been in the news a lot lately and most of it bad news. We all know how the Italian cruise line Costa Concordia ended up, but did read the news about the Panamanian fisherman suing Star Princess cruise ship for failing to pick them up? According to a news report from a month ago, the crew was alerted to the problem, but did nothing. That's not good.


So, my comment for the cruise ship skaters would be, if someone mentions something about "stranded fisherman ... waving for help", don't ignore it. Tell the crew, tell the captain, tell the Coast Guard. Don't let Royal Caribbean receive the bad publicity that Princess will.


And finally, let's hope the cruise ships with ice show will never let this happen on board.


Gaddafi’s Son Built a Ship With Deadly Shark Tank Inside

Hannibal Gaddafi—son of the assassinated Libyan dictator—built a ship with a 120-ton sea water aquarium inside. Why? To put six sharks inside, including two bull sharks and two whites, the most dangerous in the world. 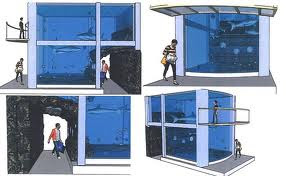 Why in the world would you do that? 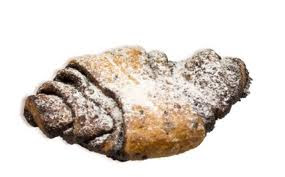 There is a point in the novel Ice Charades when the protagonist, Sue, carries a croissant in her purse to wolf down as soon as the *weigh-ins are over. Even though eating a croissant or even a hamburger probably wouldn't make you one pound heavier, one hour later, it's the psychological feeling that weighing in when the tank is completely empty gives you the best result.


It's an ongoing theme in the book.


Things don't go as planned during *weigh-ins and that croissant gets smushed before the end of the day. Not smashed, but smushed. I like the sound of smushed much better. See photo above ... although that's a clean, direct smush ... not like the half-smushed, partially-torn greasy-napkin-bleeding-onto-Sue's-wallet croissant I envisioned.


Then this weekend, it dawned on me that my new, favorite breakfast treat for the last three months is ALSO a smushed croissant, called the franzbrötchen schoko. (chocolate french bread)


They have smushed it on purpose. And then - it seems like to me - they fry it with a chocolate glaze and dust it off with powder sugar. Wow, genious. All you need to do is shove a stick in there and you've got the next State Fair sensation.


I never knew of this delicacy from Hamburg, in all of my days touring with Holiday On Ice. That's probably a good thing, since making my set weight was hard enough with the regular croissants and struedels and good ol' baguettes and Swiss chocolates etc etc, coming my way. But in writing about the state of Sue's pastry back in 2007, it's as if I always knew.


** weigh-ins: Subjecting a skater to a (usually) weekly weighing to see how much they weigh above their set weight in order to fine them or even fire them occasionally.