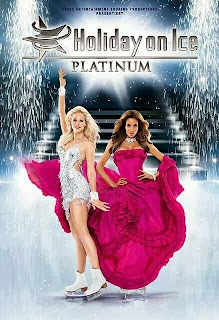 hey HOI, that girl in the silver costume, she's not a skater. A skater wouldn't stand with her free leg like that. There are dozens and dozens of beautiful figure skaters - why didn't you use one of them? They'd probably do it for free, (they had to in the past) so why hire models? Just sayin.

But Happy Birthday ... since 1943, Holiday On Ice has had over 325 million audience members, 99 different shows and 54,400 performances. Not bad. As I like to say, every year millions of people journey to see an ice show somewhere in the world. And some even wanted to go.

But, all kidding aside. Those aren't bad numbers. Let's hear it for 70!

And on November 21, 2013 Holiday On Ice will premier it's latest show, Platinum. They're enlisting a famous German designer Harald Glööckler for some of the costumes. 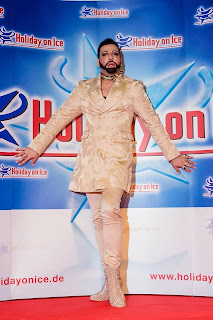 I'm sure those gowns will be so bedazzled they'll look fabulous, but I feel sorry for the gals who will have to skate in them.

And I also have word the fabulous Rohene Ward will be back to skate. 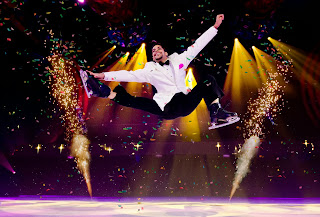 He was the soloist from HOI's production of Speed and one of the best show skaters I'd seen in decades. He alone is worth the price of a ticket.

So this show is going to be good, me thinks.

5 Songs To Use for the Sochi Figure Skating Exhibition Programs 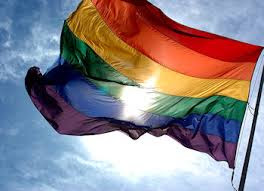 In the previous post rant, I mentioned the athletes shouldn't be concerned about staging their own protests. Hopefully the fans and the media will take up that cause.

But if any of the skaters did want to make some kind of a statement ... maybe in their exhibition program ... (meaning they've already won a medal and are quite a big deal now and are a day away from flying home)... well, how great would that be?

So here are some possibilities for Sochi exhibition programs I'd like to see.

In order from most to least subtle:

#5 Any song by Ricky Martin, George Michael or Elton John. Many will not make the connection that these gentlemen came out at some point in their musical careers.

#4 "It's Raining Men" by The Weather Girls - definitely not as subtle and really only works if a male skates to this one. But I suppose a pair could do it. No matter what, it's a catchy tune.

#3 "I'm Coming Out" by Diana Ross - the unofficial Gay-Pride anthem. This may not work for any of the skaters unless they really do have something to announce.

#2 "Born This Way" by Lady Gaga - Again, may only work for the right skater. A more contemporary song than #3 with a similar message. Another catchy tune.

and the #1 "Same Love" by Mackelmore and Ryan Lewis featuring Mary Lambert - personal bias here. This was one of my favorite songs this year. Even just the opening piano chords leading into another song would make a statement.

You know my other favorite song? Thrift Shop.

Both are written by these guys. I think they're geniuses. And if a skater wanted to skate to "Thrift Shop" instead? Well as the song says, "this is fucking awesome!"
Posted by Ice Charades at 5:09 AM 2 comments: 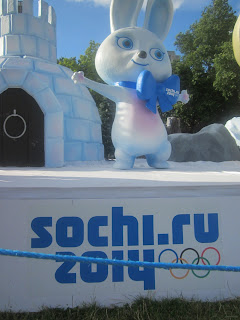 There's been lots of talk about the upcoming Olympics and Russia's stand on gays. A good place for you to start would be The Skating Lessons: 9/1 This and That post. Very, very insightful. Jenny Kirk and Dave Lease call on the USFS to put out a statement so their skaters know what to say. I would second that.

Another must read is the article in Slate magazine written by Marc Naimark and Charley Sullivan - Sochi Isn’t a Host, and Olympic Athletes Aren’t Guests, So Stop Talking About Hospitality which just illustrates why the USFS really needs to put out a statement. They pile on Jeremy Abbott's statement stating it's a lousy analogy. I don't want to read that skaters are lousy at anything.

So Ice Charades is about to open her mouth and hope that a skate boot doesn't land in there.

Are you ready for more or have you had enough? Because I want to broaden the discussion, twist it on its side a bit. Here we go ...

Congratulations Gays, it's not you ... well, not just you.

Russia - and not just the government - is xenophobic and homophobic, and it's been that way for a while. Of course not everyone feels this way, but it seems only now the anti-gay behavior is getting scrutiny.

Speaking of my own experience, back in the late 90s, I worked as a contractor for the US State Department and the official cables warned not to send African or Asian American employees/contractors to Russia. They faced random harassment and violence in the street. My boss sent all of us anyway. Sure enough in one outing in Moscow, there were five of us co-workers, all white Americans except for one of Vietnamese ancestry and he was the one stopped by the police and asked for his papers. Luckily another co-worker spoke fluent Russian and talked the police out of sending a US Embassy contractor to jail. On other visits, my African-American co-workers were beaten up walking back to their hotel.

So it didn't surprise me to read more recently that a fan group for the St. Petersburg soccer club Zenit sent a letter stating the team include no black or gay players. Gotta love any letter that states - we are not racist - because that usually means ...

Now racism in soccer isn't only in Russia. This is a growing problem in much of Europe. But the Olympics are going to be in Russia, so lets bring the discussion back to them. And let's not let them say the "gay propoganda" enforcement is for the protection of children. No, it's intolerance. Let's call them out on that.

So what to do? No boycotts. That doesn't help anyone. And I don't want athletes to feel they have the burden of protesting ... they need to concentrate on their sport. Hopefully we fans will take up the cause.

Posted by Ice Charades at 8:00 AM No comments: