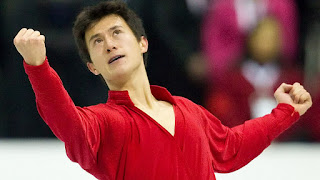 Now that I've got your attention - can someone help me out here?

So, I'm watching the exhibition numbers from Skate Canada on Eurosports yesterday ... first thing, exhibition programs and Canada are neither Euro nor sports, but anyway ... I have to say congratulations to all of the medalists, including Patrick Chan.

He did a lovely show program, but he was in - what-looked-like a U.S. Marine Corps uniform holding and a mop - and I've got to say, WTF?


Here's a YouTube link to the same program done for Artistry on Ice. 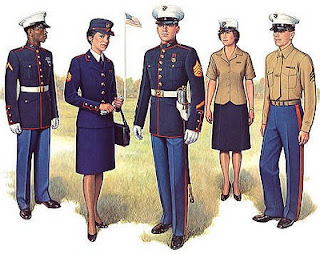 See that Marine wearing his Dress Blues on the far right? That was Patrick Chan, minus the hat, but holding a mop.

Maybe I should be more P.C. and just ask why? He's a Canadian wearing a U.S. uniform. I find that odd, do you?

Then I've got to ask, why a mop? I don't associate Marines with mopping too much. Usually it's the guys who are first in or guarding an embassy kind of thing.

Full Disclosure: Most of the marines I've encountered were during my time working for the U.S. State Department, and I always found it honorable, but a touch troubling that they would be willing to give their life for a stranger like me - just a temporary contractor plugging in computers at the embassies for a week or two - at any moment.

So maybe they're Marines that mop, but that's not the first thing that comes to mind with Semper Fi.

So, I'm not sure what to think. Is he honoring a US Marine? Did I miss that part (I was watching a German broadcast, after all). Was he picking up on the spirit of the Marine Corps Marathon in Washington DC, that was held the same day?

Or was he just late to a Halloween party and needed to save time?
Posted by Ice Charades at 6:18 AM 4 comments:

Casting for a Male Soloist 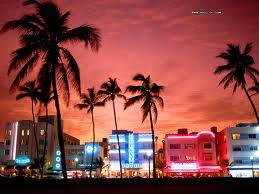 Florida in December sounds nice and warm to me!

ACCOMMODATIONS & TRANSPORTATION IN THE USA INCLUDED.

Posted by Ice Charades at 5:17 AM No comments: 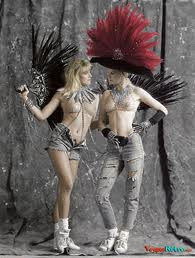 Did that get your attention?

I'm not going to talk about "Nudes On Ice", or as the cast referred to themselves in "Boobs on Cubes" that took place in Las Vegas in the late 80s. Technically, that show wasn't nude, just topless, and curiously, the "skaters" who were topless, weren't skaters at all. They were bitter showgirls forced to learn to skate to retain some kind of a paycheck!

I'm glad that I never had to decide whether I would skate topless in a show, because I'm not sure what I would have done. To bare or not to bare - either way there were disadvantages.

I think I could have gotten used to my boobs being on parade, since I did shows other shows where my butt was hanging out for all to see (sorry about that Grandma!).

Okay, Miss Ice Charades, let's talk about whether anyone would have paid to see your boobs. Yes, you make a good point.

But back to the nudity, in so many backstages of so many shows, they were anything but private. This was a world with male stagehands, who were, I think, predominently straight, who could easily catch us in progress from one costume to the next.

All of skaters got used to it. There was no point in protesting the situation, because you might just make it worse for yourself.

So this past weekend, I got to thinking about nudity again, when we had our first German sauna experience. No bathing suits allowed.

I would be lying if I said I was comfortable hanging out completely naked with all of the other sauna enthusiasts. In northern Europe and Scandinavia, this is normal, btw. I used to do it all the time without caring too much ... what was different this time?

Then it hit me.

This time I and my skating co-workers wersn't the only ones on display. Seeing everyone else hanging out in the nude made me think I preferred it the old way.
Posted by Ice Charades at 5:49 AM 3 comments:

Want to skate in Japan? 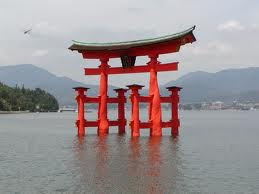 Why Figure Skating is GREAT

If you ever have a day when you don't want to get on the ice or worse, you just want to quit ... Ryan Jahnke has a great pep talk for you on MySkatingMall.com.

On the blog, he's written a superb article that covers all the bases and asks everyone what they think. Don't miss it ... click here.

It's easy to understand why skating champions think figure skating is great, because it has been great for them, but my favorite reasoning comes from a quote of a teenage skater:

“Figure skating teaches you a lot about life itself even before you get out there. This sport is like a roller coaster, and so is life. You have your ups, and your downs. There will always be people who want to see you rise, and there are always people who want to see you fall. How you deal with these falls is how you succeed. This concept applies in life itself. You face this problem everyday of your life, and you face this problem everyday in skating. In skating though, you literally fall, but you have to get back up and keep going. You cannot look back, or feel sorry that you fell, you just got to get up and keep going. You have to get up and try again. THIS is why I love figure skating.” -Casey Yee

You have to get up and try again.

I have to remind myself of that when I'm quick to give up on other things ... try again.

Thanks Ryan!
Posted by Ice Charades at 4:44 AM No comments:

A Salute To The Ladies Of The Ice

Well, not like soldiers, but skating in her honor. 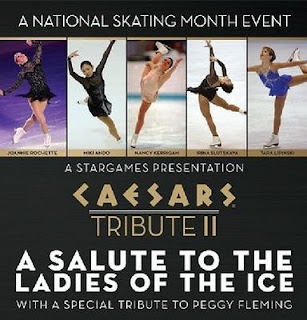 If you can get to Atlantic City on December, 3rd, you may want to get tickets for this event. Click here to order them from Caesar's in Atlantic City.

Randy Gardner will choreograph and direct, so there will be some tricky footwork, no doubt.