In honor of Toller Cranston, part 3 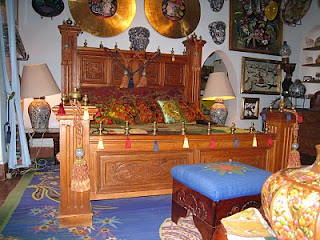 If you could stay in a guest room like this, you would right? 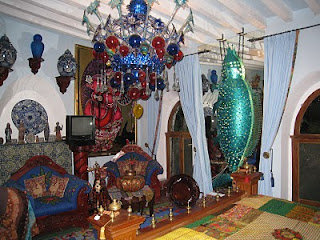 It came with an amazing bathroom and porch out the front and back. 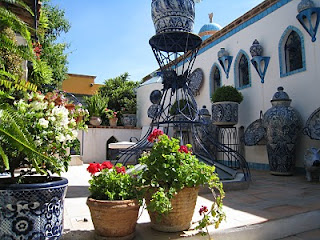 And you could wander through the yard that looked like this and ... 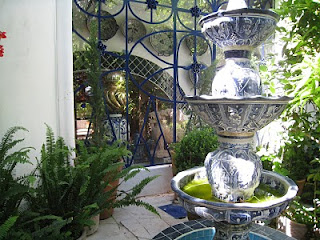 this, on the way to the pool. 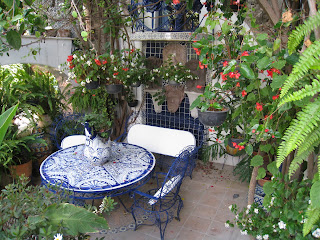 Let me show you this picture again. See the paintings on the wall? And the rug?

And in this picture ... the glass chandelier and the lighted fish on the wall?

He made all of it!

So why would we pass up a chance to visit Toller Cranston one more time. He had invited to stay the last time and he was as gracious as ever.

At dinner time we strolled out into the town and ate at the New Orleans restaurant called "Harrys" that sported two giant-sized paintings by Toller and an entire staff that knew him. He looked very dapper in an olive green suitcoat with embroidered beading all across the back in a native Mexican design.

The next day for breakfast, we went to another restaurant where he was equally known. He walked in wearing a crisp pink, silk button down and a giant, beekeeper hat that he recently purchases in Guatamala. He turned heads.

It was quite the contrast to see him inside his house where he was wearing some rags completely covered in paint. But that's his life now. He's a painter.

There are paintings (or pottery) covering the walls of every room of the 15-bedroom hacienda that is smack-dab in the middle of the old part of town. He told me, he figures the house is worth 7 million, but I say there is probably another 7-million worth of art, furniture, and "items" inside.

What you won't see inside his house are any photos or souvenirs of his skating. No trophy room, nothing. He mentioned his medals once (he said I could have them ... I'm glad he didn't say that directly to my 6-year old daughter, because she would have taken him up on the offer)but I never saw the medals.

It's not that he's bitter about skating or not winning (which I think he should have) the gold in the Olympics (call it the curse of the Canadian men). He's a painter now, living large in a beautiful colonial Mexican town. He has fabulous friends (Nat King Cole's daughter - no, not Natalie - the other one, Olivia was over for a visit when we got there. (If you look up Oliva Cole on IMDB, you'll see she's been in about 30 movies or tv shows ... I swear she's more beautiful now as a bald, almost 70-year old. Mexico has been good to her.)

But back to Toller ... the most amazing part of our stay was when he asked me to watch the reality show "Johnny Weir Be Good" with him. He had received all of the episodes from the producers who were asking Toller's advice for what Johnny should do next. Should Johnny keep skating? Competing? Should he try his hand at his own touring show? Should he quit and enroll in design school?

We watched the final episode and I couldn't help but wonder what Toller was really thinking. At times he spoke his thoughts out loud. He commented that he knew how Johnny felt to have skated so well in the Olympics and be placed so low. He also understood how Johnny wouldn't have wanted to go to Worlds after what I just described in the last sentence. Toller also couldn't believe that Johnny allowed the filming so close before, during and after the Olympics. "How could he concentrate?"

There are many parallels between Johnny and Toller. Skaters, artists in skating, and now writers. Although, remember Toller has written several books already. Trust me, they take a little time to crank out.

If he had advice for Johnny, one thing was not to do his own traveling show. "You always lose money when you do your own show," he demurred. He also felt Johnny shouldn't try to compete because he's lost the edge with all of the TV and PR distractions.

If I could thrown in my two cents, I would tell Johnny, he should plan a little retreat to a beautiful city in Mexico and stay with the master for a while. Toller could give him (and show him) about long-term plans as well.

What do you think he should do? Short term? Long term?


It is nice to read the posts again, because I had forgotten some of the details.  It was four and a half years ago, and Ice Charades memory is spotty at best.

But it is also sad to read about planning trips to Mexico, because there will be no more pilgimages to see the Legend.  For show skaters, this was as close to Mecca as you get.
Posted by Ice Charades at 9:41 AM No comments:

In honor of Toller Cranston, this one goes out to Johnny Weir 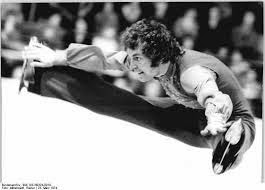 I didn't have a formal interview with him, because I'm a lousy interviewer, and Toller asks as many questions as he answers.

His curious mind has served him well.

But here are a few nuggets I asked, he answered, and I was later able to remember ...

How much time do you spend painting each day? Depends, sometimes it is the entire day.

Who lived in your house before you bought it? At one time it was a school for bad little rich kids.


He smiled when he said that.

Do you have skating dreams? Yes, his are of the competition variety where he's having trouble landing his jumps, or even getting to the ice.

Do you still choreograph in your head after hearing a song you really like? Yes, all the time.

What advice would you give to Johnny Weir?


The subject of Johnny came up a lot, partially because we watched his reality show, but also because Toller had just been asked this by someone in Johnny's camp. From the bits and pieces he mentioned, here you go Johnny: don't go back to competitive skating, but keep skating, and don't put money into your own show ... you always lose money on your own show. Stay true to yourself.

I sense that Toller is glad he had his life in painting along side his skating career. Skating can't last unless you want to teach or choreograph. The painting, on the other hand, will keep him very busy for some time now. 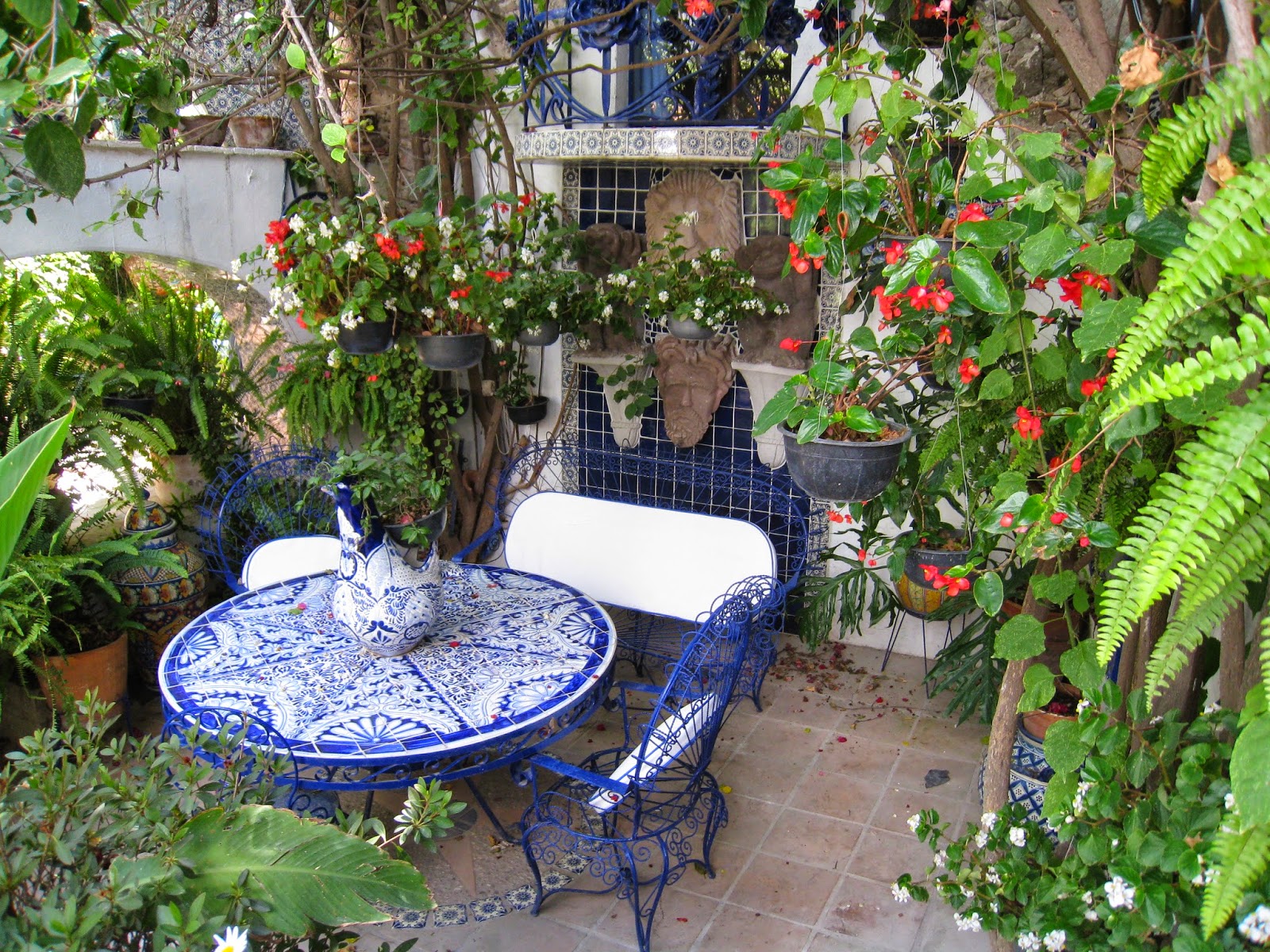 In honor of Toller Cranston

There's not much I can add to the wonderful tributes pouring in for Toller Cranston.  Even The New York Times has eulogized him.

But we shouldn't be surprised because he was the most artistic skater of all time (imho).  So in honor of the legend, I'm re-posting my posts about him.   Buckle up, there are a few of them.

Ladies and Gentlemen ... the first post about the first visit to Casa de Toller! 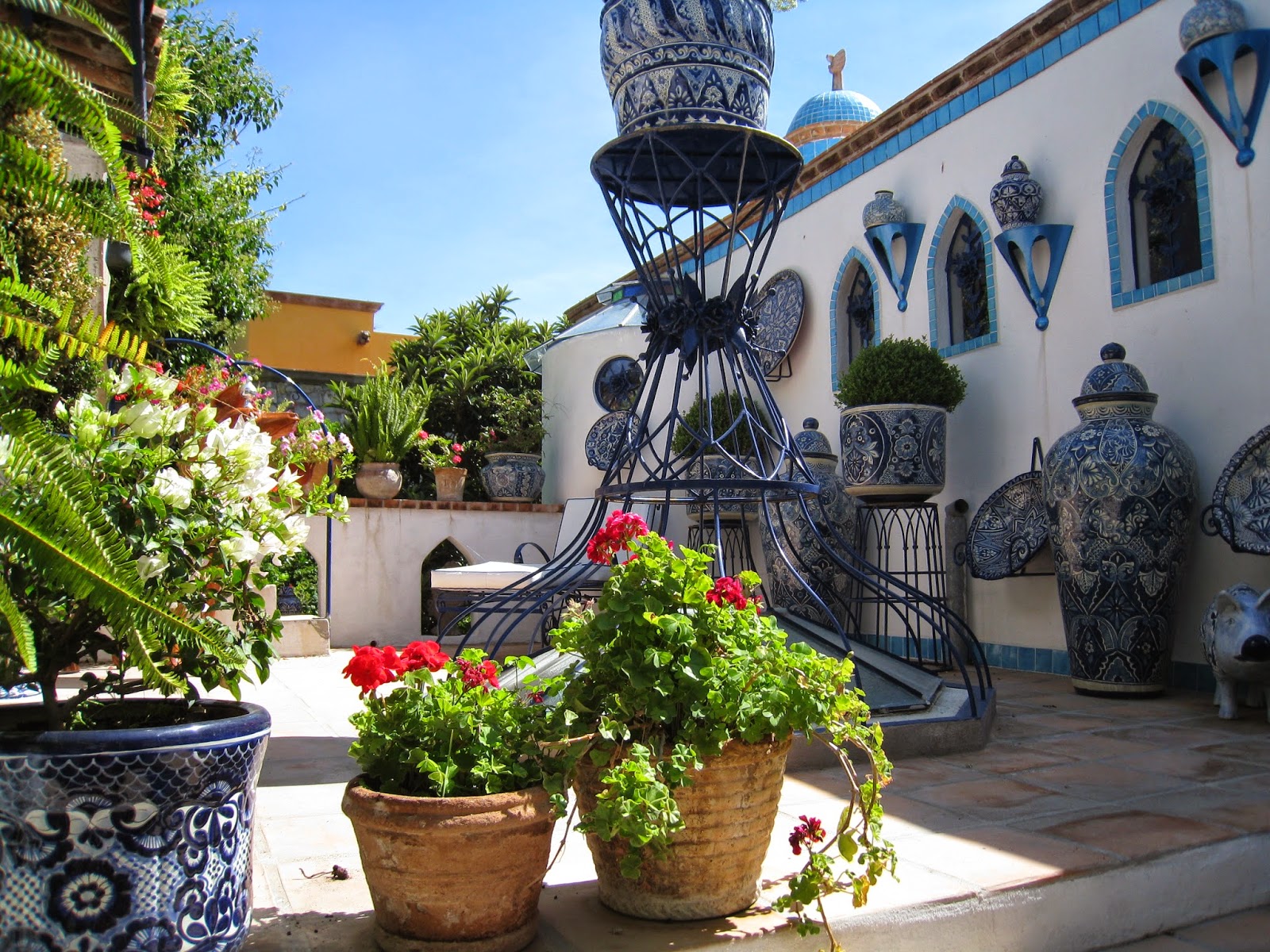 
Hello folks. Just got back from a most incredible weekend. Yes, it's true the Ice Charades family drove to San Miguel de Allende on a pilgramage of sorts to meet Toller Cranston.

It is going to take a day or two to boil down the essence of our 4-hour conversation and house tour. I want to think it through, so I can give you a proper description of our time there. But I will leave you with this quick recap:

It's almost impossible to count the number of talavera (Mexican-style pottery) plates throughout the 15+ bedroom estate ...

There may or may not have been artwork broken by my 6-year old ...

and we almost made off (accidentally, of course) with a pair of Toller's underwear ... 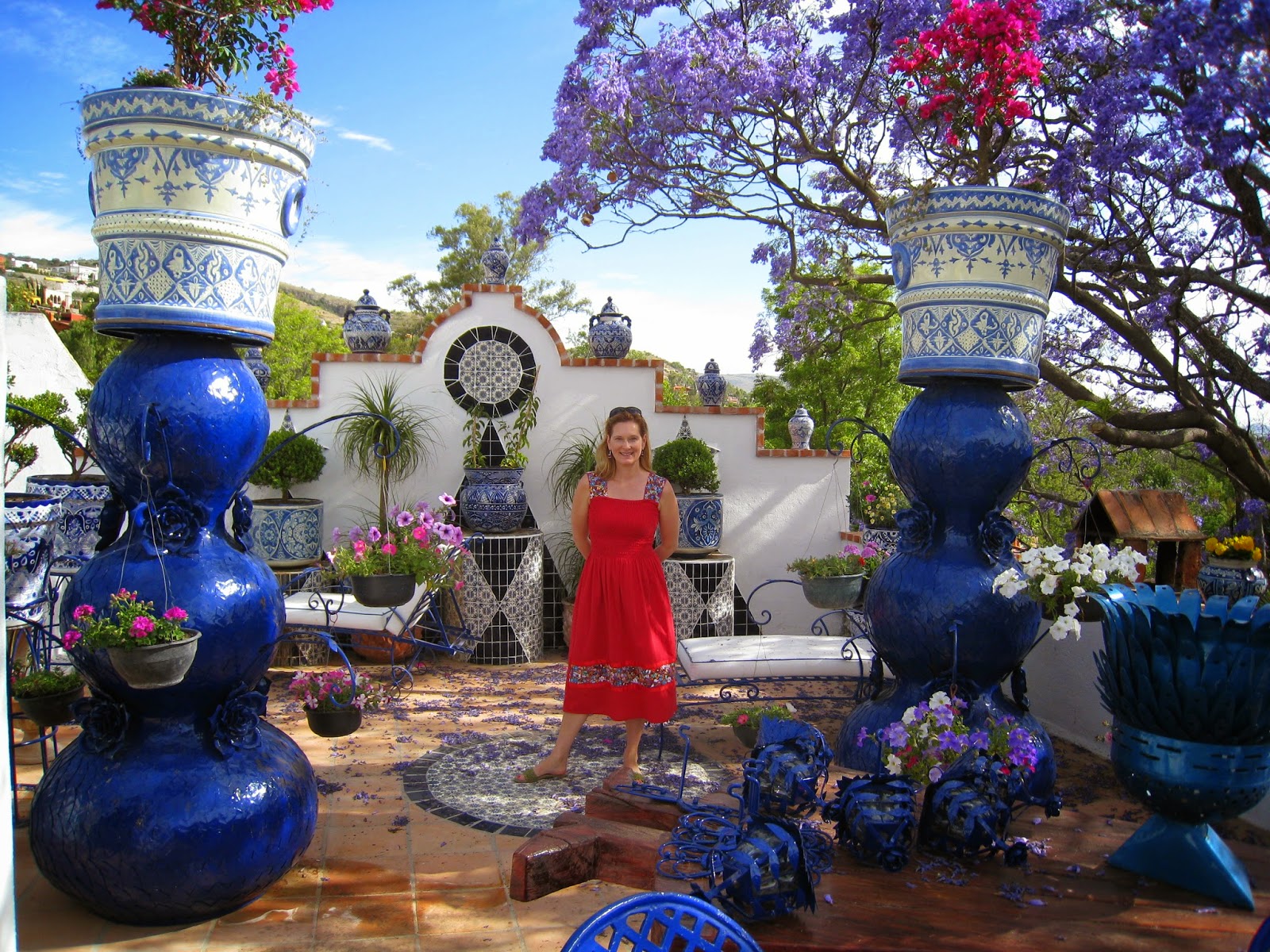 Posted by Ice Charades at 9:08 AM No comments: 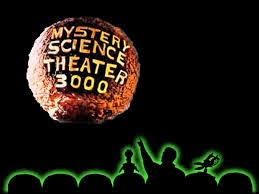 I follow a Washington D.C. radio sport's show on podcast and lately the host has been toying with the idea of a new TV show featuring two sport's pundits talking about an NFL game, while it's on.  Think "Mystery Science Theater 3000" and ESPN Classic's "Cheap Seats" getting together on Sunday afternoon to watch a football game from somebody's couch - that's what this show would be.

Cheap Seats, btw, a personal favorite of Ice Charades!  You should check out their "Spelling Bee" episode.


So I got to thinking ... I think figure skating needs the "Mystery Science Theater" treatment.

Do you think it could work?

Imagine putting two veteran A-list skaters together to talk about World's or the Olympics during the short or long programs.  There's lots of dead time they could talk over with charming anecdotes of their own nervousness or costume malfunctions or what was going through their heads when they were really bombing their programs.  Don't think there's any dead time in live coverage of figure skating?  How about all the time waiting for the judges' scores in the Kiss-N-Cry or the two-minute glide around the ice that skaters take nowadays between their name being called and the starting position of their program and let's not forget skating's ultimate dead time ... the zamboni!

So we find the former champions sitting in one of their livings room ready to dish on the newest crop of competitors.  Who's game?

Wouldn't you pay to see the Brians chatting about Patrick Chan's quads and whether he's holding back during the short only to bring it later on.  (Wait a minute, Orser's coaching some of these skaters so he's already sitting in the Kiss-N-Cry.)

So, how about Kristi Yamaguchi and Michelle Kwan giving us their thoughts on Yuna/Mao rivalry?

Excuse me, Ice Charades, but that's so 2010, can you get more with it please?

Okay, okay.  I think if you could pay the skaters to be candid enough, we'd have something people would want to see.  (Wait a minute, I guess we have The Skating Lesson for candid commentary.  And very insightful too.)

But I still think people want to see their old idols rehashing the glory days.  I do.  What about the king of skating commentary ... and I bet he's available.  Wouldn't you pay money to be a fly on the wall at Dick Button's house when World's or the Olympics were on?

What do you think?  Who would you pay to see "hosting" Nationals right now?
Posted by Ice Charades at 11:05 AM 2 comments:

... seems like a nice place to work right now, no?  Luckily there's a job out there for one female skater.  How's your double axel? 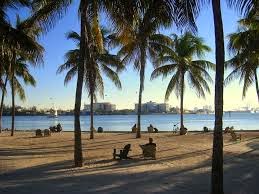 Posted by Ice Charades at 9:40 AM No comments: