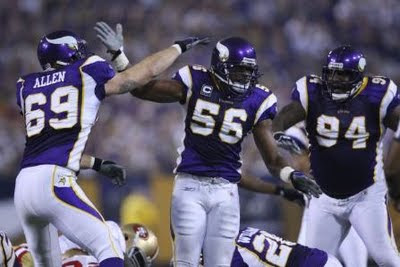 Sorry. This isn't a picture of the game-winning catch on Sunday - the one that I saw over and over again on the news - but it's from the same game. I wish I could post that picture so you can visualize what I'm about to explain. (If you are so inclined, you can watch this video and at 1:46 or 107.93 and they'll show a photo.)

For any life-long Minnesota Vikings fan like myself , this was an incredible win. Truth be told, I had given up with five minutes left to go but my mom called as the game ended to tell me that the Vikes pulled out a victory with two seconds left.

Luckily for me, Mexico loves American football, so I was able to watch the game-winning catch on a different channel broadcasting one hour behind for those on the west coast. It was a beautiful.

Okay, Miss Ice Charades, way to rub it in that your team won, but does this have anything to do with skating?

Why yes, thanks for asking. I know this is a stretch, much like the game-winning catch itself, but seeing it over and over on the news it reminded me of landing jumps in skating. Stay with me.

If you watch his feet (both of which had to land in-bounds or the Vikes wouldn't have scored the touchdown) you could see him twist his foot so it would land inside the line even though his body from the ankles up was completely out-of-bounds. It reminded me when skaters go into a jump it can turn out one of three ways.

There is the jump that even from take-off you know you're going to land. You're upright and rotated enough and it will be smooth sailing on the way down. Then there are the jumps that you know from take-off are heading south and there is no way to stop it. You brace yourself for a fall. And then there are those jumps that don't have a clean take-off, but you know in the air that if you tweak something, you can still land the jump.

That's what the catch reminded me of. It wasn't the usual catch, but he tweaked his foot to land in bounds and, well, you know the rest.
Posted by Ice Charades at 11:23 AM 4 comments:

I'm sorry I haven't posted, but I've been wrapping up a big project. In less than a month I'll be able to bring you exciting news.

I also hope to get back to regular posting next week. So for now I'll leave you with this: a toepick doesn't look like a toe or a pick .... discuss. 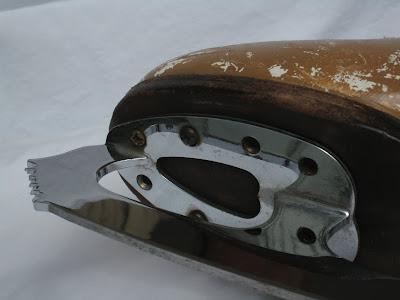 Wouldn't You Know It 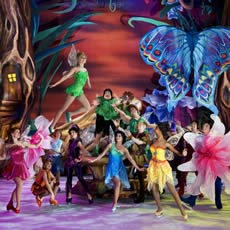 I was at a birthday party for a classmate of my daughers this weekend. I was talking to one of the other parents - whose English is excellent - and found out the company he works for brings rock bands and shows to Mexico. U2, Madonna, Blue Man Group and Cirque du Soleil. So I asked, do you work with Disney On Ice too?

Yep. And for the first time, I got to hear about an ice show from the other side. And how is Disney On Ice doing in their view? In a couple of words - not good.

Right now the negotiations go something like this: Kenneth Feld calls and says, "Hello Mexico - can we come down and do some shows?" And they respond, "Well ... Ringling did terrible the last time they came." Kenneth says, "I'll give you two shows, Disney On Ice and Disney Live, for the price of one." Okay.

At this point, I can't speculate as to why Disney On Ice is down ... recession, general decline of skating popularity or general fear of the Princesses taking over the world. But do you remember my earlier post of my embarrassing effort to stalk, I mean talk to the skaters? I was hoping my daughter could meet Tinkerbell - well, guess who had free tickets he couldn't give away and a Meet and Greet with the skaters.

Wouldn't you know it!
Posted by Ice Charades at 9:28 AM 4 comments:

Believe me, I've been knee-deep in Google (pages 8 and 9!) to get to the bottom of it. But good news, Wikipedia - Patrick Swayze has that part right.

What is surprising is I can't find anything on the internet about his time with Ice Capades.

But that is a minor point - what is true about him is that he was clearly one talented guy: actor, dancer, skater, singer and football player to name a few. I love to remember him from the SNL sketch with Chris Farley auditioning to become a Chippendales dancer.

My thoughts are with his wife, Lisa Niemi, of thirty-five years.
Posted by Ice Charades at 12:42 PM No comments:

I was at one of the city's biggest market yesterday when I noticed one little store had latched on to the trick I learned a long time ago in an ice show far, far away.

I can't claim showgirls invented it, but I wouldn't be surprised ....

Anyway, like the picture shown here, they had a long, rectangular, free-standing mirror tilted slightly back against the wall. Have you ever stood in front of a mirror tilted back? It's a great thing - you look four inches taller and ten pounds thinner. Just don't tip it too far back or you get into the crazy carnival/hall-of-mirrors territory.

We had those mirrors, slightly tipped back, in a couple of different dressing rooms and we all knew it wasn't the real picture, but we looked into it anyway. We just wished they could have used the same technique out on the ice!
Posted by Ice Charades at 9:51 AM 2 comments:

To All Of Those Working Skaters

I figured many of you wouldn't be working yesterday anyway. Mondays are often dark days or travel days.

Most of the shows I did I was ecstatic to be there. Sure, I had my bad days, but I wised up after the first show and tried not to take any number, any costume for granted. As ridiculous as the skating "Mint Candy" number was, it was still better than not working and not having a paycheck.

And I have to admit that it was kind of cool to write "Professional Figure Skater" in the occupation field of my tax returns.

So for those of you without a job or are interested in getting hired, I highly suggest joining the PFSC, if you don't already belong. They have all the latest listings of jobs, producers, skaters, a convention in Sun Valley Idaho and even a health saving plan.

Check it out - it is the first link under Skating Links to your right.
Posted by Ice Charades at 4:34 PM No comments:

During the show in San Luis Potosi, I had the privilege of meeting the mother of one of the pair skaters, who flew into town that day.

That often happens in ice shows, btw, friends and family of the show skaters all have one thing in common - they are not skating in the show, but are there to watch it so good bonds always develop.

Anyway, this mom had moved all over the US for various jobs AND when her daughter, a teenager at the time, started with a new ice dance partner in another city in another state.

WOW - that's sacrifice! I know of families moving because one or maybe both parents gets a new job, usually a better, higher paying job, making the move worth it in the first place and usually benefiting everyone in the family. But this was the parent moving for the kid, changing her job and uprooting her base, so the kid can continue in skating.

The good news here is that the mom seemed very flexible, adaptable and successful in her own career. And the daughter had made it to US Nationals in ice dance. Neither seemed to have any regrets.

And another nice little bonus for the mom, was getting a private room aboard the cruise ship touring Scandinavia with a (plastic) ice show, starring her daughter, ALL FOR FREE! The mom loved it - I bet I would too - even though Miss Ice Charades get nauseous easily and is not sure she could handle a cruise.
Posted by Ice Charades at 12:14 PM No comments: