... before walking into a writers' critique group.

Since I'm so close to rolling out a sequel (yes, Mom, I promise soon) I thought I would write something not about skating for once.  Excuse me, Ice Charades, you often don't write about skating.

I know, I know, thanks for pointing that out.  But if any of you are thinking of writing fiction yourself, this may be the post for you.


I'm not claiming I'll make you a great writer, not even a good writer, I'm only claiming I'll keep you from sucking more at writing.  Not a high bar, to be sure, but one you still may be grateful for.  The good news is you're not alone.  Just google 'first drafts suck' and watch the magic appear. So with that, take a look at these five tips and see if you can't get out the red pen one more time and work your own magic.

5. Keep the past in the past: by this I mean try to avoid mixing verb tenses.  This seems obvious, but it's harder to keep track than you realize.  My novel took place in the past, but when I was writing the action scenes it often came out in the present tense many times.  This example from Now Novel shows how easy it can be to mix up verb tenses.


Sarah runs her usual route to the store. As she turned the corner, she came upon a disturbing scene.

This is wrong because the verbs do not consistently use the same tense, even though it is clear (from context) that Sarah’s run is a continuous action in a single scene.


Now Novel also has a nice rundown of verb tenses.  Go there to reaquaint yourself with present perfect, past perfect, simple past, etc etc.  And no, I don't mean a 6.0 on your free skate.


4. You really, probably, likely just need only (?) one word: As Stephen King famously (?) said, "The road to hell is paved with adverbs."  Anything that ends in 'ly' is a good place to start.  A rookie mistake in any critique group I'm sure, is to come in with a bunch of lazy adverbs clogging up the action. I still remember a feisty literary-wannabe going off on me for the sentence, "I eagerly peered out the window." But she was right. Instead of writing 'eagerly' in front of peered, write out an action that shows eagerness.  For example, "I sat up in my seat after we rounded the corner and the Alps came into view. Now I was awake."

Besides adverbs there is a whole list of words that can clog up your draft.  'Just' is just the beginning.  It works fine in dialogue because people say it all the time, but the phrase around the word will still work when take 'just' out.  There are a slew of other words (I illustrated four of them in the preceding paragraph) and a good place to catch more is from Diana Urban's post on 43 Words You Should Cut From Your Writing Immediately.

3. Rhythm: Like any good melody, your writing should have beats (in your sentences).  Some sentences should be short, quick, and lean.  Hit a nerve.  Pack a punch. Shout.  But if you have too many short, dynamic sentences together the reader gets tired.  You need a variety of longer sentences mixed in.  That's where you can add a descriptive phrase or two to set the scene. My own rule of thumb is long sentences should be filled with easier vocabulary and fewer crucial plot points or details.  Example:


Basically, in light of the fact that an au-courant judging system, whether determined by the ISU or directly from the international judges panel, will be implemented, if deemed acceptable upon the receipt of skating bodies looking to transition from the current situation.


Confusing, no? How about - We could use a new judging system, regardless of what the ISU thinks.  Pronto.

2. He said, she said:  It's a lot easier to keep track of he said, she said, than he whispered, she shouted, he discussed, she countered, he thought, she pointed out, he demanded, she bellowed, "Stop."  Many authors feel you should never have dialogue tags (that's a fancy, schmancy writing term for the tag accompanying the dialogue) other than 'said' - and I mostly agree with this.  The idea is that the dialogue itself will denote what the author wants the reader to understand.  I still think you can throw in a few others sparingly.  She 'whispered' is good, because you often can't convey that in the discussion.  She 'lied' is also good, because it means the exact opposite of what is said out loud and that can have a big impact in the plot.  Here are some examples of overuse of dialogue tags (with some bad dialogue thrown in):

"I can't wait to get on the ice.  I need to work on my senior long program ," she declared with a perky giggle.
"You have to wait until the zamboni's done.  Have you signed up for this freestyle session?" he asked matter of factly.
"Yes, I take two freestyle sessions everyday," she reiterated as she pointed to her name on the clipboard.
"Well then, you will have sixty minutes to rehearse your program in ten minutes when the ice is resurfaced," he stated uniterested.

That would sound a lot better and more realistic if it went something like this:

"Can't wait to hop on the ice.  Got to do three full run-throws of my long," she said.
"Zamboni's still going.  You signed up for this freestyle?" he asked without looking up from his iphone.
Her long red fingernail pointed to her name on the sheet.
He had to look up to get his answer. "Well, no goofing around for you then."

You can see that all you need is he said or she asked or vice versa.  Somethings you don't need dialogue, only an action to keep the scene going.

1. Show, don't tell: This is a classic line that a writer should know.  I liked Jerry Jenkin's blog describing the difference between showing and telling.  So I'll link it here.  Here are some examples to see if you get the gist.

Telling: When they kissed he could smell cigarette smoke and she was scared.
Showing:  When he leaned in, he smelled tobacco on her breath and felt her hand shivering.

Telling: The temperature rose and the plants needed water.
Showing: The plants wilted in the heat.

Telling:  She completed three run-throughs of her long program and was very tired by the end of the freestyle session.
Showing: She had to be helped off the ice after the third run-through.  Twelve minutes of max output skating was too much.


Showing helps the reader feel the action rather than the passive "telling" them someone is cold.  There are times when "telling" is acceptable, when you need to cover ground and bring in backstory.  But be careful not to load it up in dialogue to the point where it doesn't sound natural. 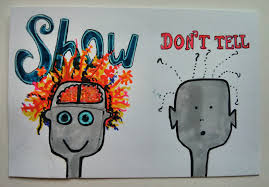 I hope these tips will help make you a better writer.  There are plenty of writing blogs with helpful tips and examples that are much better than what I've got here.  This is meant as a jumping-off point (hopefully you'll get a 5 for your GOE!) to get you sound advice.  Good luck!
Posted by Ice Charades at 1:22 PM No comments:

Imagine if he had figure skates on!

Wait for the amazing "back sit spin" at the 25 second mark!  Pretty amazing stuff.
Posted by Ice Charades at 4:51 PM No comments:

It's going on as we speak and I hope you can see this link to some photos on Facebook.

Hopefully you can see these links.

When I skated in Prague in 1983, it was December and cold and miserable.  This looks like a much better time to see the city!
Posted by Ice Charades at 11:27 AM No comments: