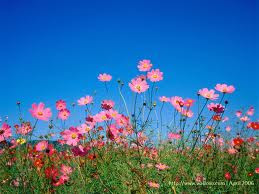 What Coaches Should (Not) Wear

This post sounds like it's coming from Xan's blog, but really it is just a rant coming from me.

yes, I'm talking about what a coach shouldn't wear .... and I'm talking soccer. Most soccer coaches wear either a suit and tie or a athletic outfit with the team logo. While the suit and tie doesn't seem that comfortable for coaching a game (hockey coaches seem to do this a lot too) it shows their respect for the game. 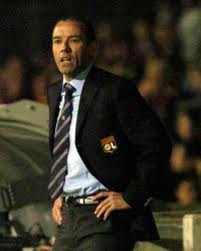 Other coaches want to be more comfortable to pace the sidelines and move about during the game, so they wear comfortable track suits with the teams colors. They probably feel they can think better dressed like that or it embraces the team spirit more. 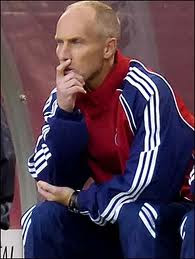 But I found it distracting and a little disrespectful to be watching Zambia's coach, Herve Renard, last night when his underdog team beat the heavy favorites from the Côte d'Ivoire(Ivory Coast) to win the Africa Cup last night. 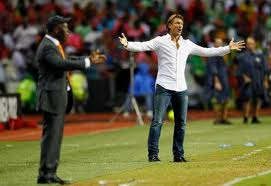 Congrats to you, Herve Renard, and your team on a great win, but you look like you're thinking more about going out to dinner or a disco, rather than coaching a championship game. The shirt is a little tight to be comfortable, don't you think? I saw you pulling it down a lot during the game. 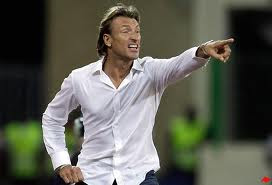 Excuse me, Miss Ice Charades, but Herve Renard is French. He probably is thinking about where he is going out to dinner. Plus, he says this is his lucky shirt.


Next post, back to skating, I promise.
Posted by Ice Charades at 4:35 AM No comments: 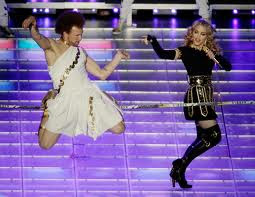 Why not? Since it's a light week in skating news .... a review of Madonna's half-time performance ...

From a very random look at my Facebook skating (and other) friends, Madonna got great reviews. Several shout-outs. Several "likes." It doesn't surprise me that performers themselves like a performer like Madonna.

Go ahead, try to do a few of those knee-bending squats she does all the time. I can't - I get tuckered out after three. But that's why Madonna looks like she does.

And she performed as she always does ... solid.

I was even more impressed with the guys and gals who designed that stage - WOW. And the lighting! Wow - again. Perhaps that is going on the road with her when she tours.

But I've got to say, what if you were one of those people who paid beucoup bucks to sit on the 50-yard line and come half-time all you saw was the back of Madonna's head and the scaffolding holding up that awesome stage? The concert should have been in the round, so everyone got a show. Don't worry, there were enough cameras to cover all four sides for continuous TV coverage. But, TV trumps all, I guess.

I was glad to see an homage to marching bands. In my opinion, that's what they really need at the half-time for a football game. Bring out the best marching bands and let them dazzle the crowds.

If any of you have ever seen Blast (the Show), you know this can be done. If you haven't seen the show yet, you won't be disappointed. Madonna seemed like an odd choice for NFL fans, to me. But anyway, the nod to marching bands was a nice touch. 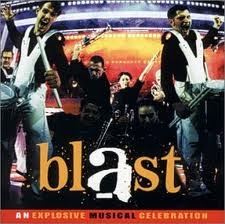 The only question I have is about the guy on the rather-low high-wire? WTF? Was that Richard Simmons?
Posted by Ice Charades at 6:33 AM No comments: