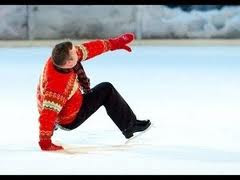 I may have held the title of worst pair skater for a while - sorry Charles - but not the worst ice skater. That was the name of this skit by the group Improv Anywhere in cooperation with Ice Theatre of New York and performed by Kenny Moir.

Have you ever heard of these Improv Anywhere guys? 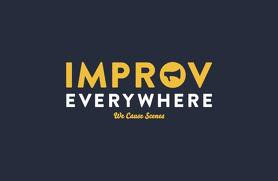 I've got to say I'm a huge fan and while this is cute, it is one of their weaker videos, IMHO.

If you have a few hours to kill on the internet, I suggest you go to their website and take in some of the their best videos.

They've got the Frozen Grand Central Station, The Best Buy prank, The Food Court Musical, The Star Wars Subway Car, or one of my personal favorites, Carousel Horse Race. But there are dozens and dozens of clever videos. The Wedding, Where's Rob, and the latest, No Pants Subway Ride.

A lot of their stunts happen in New York City, but like the name says, "anywhere", so be prepared in case you find yourself in the middle of the Improv.

By the way, the best skating comedy ever? IMHO, that would be Kirk Wyse in Holiday On Ice in 1986.

He was such a terrific skater, that his whole program could have been entertaining skated as normal. But halfway through he took a tremendous "fall" that had him landing in the lap of some unsuspecting (or were they expecting it?) audience member.

Everyone gasps, he gets up and is okay, and then continues on with his routine. Then a light falls from the ceiling almost flattening him. Then part of his costume falls off and by this time you know it's a comedy and you're excited to see what comes next.

Unfortunately, this routine is not on You Tube. (I spent quite a while trying to track it down too, but alas.) I did find that he teaches at Amherst Skating Club in New York. (Maybe if he hears of this post, he'll send me the video - yeah, maybe.)

I think Kirk is more well known for is his rendition of Charlie Chaplin in Ice Capades, complete with his dog. No one has done Chaplin better. I tried to find that video too.

Shopping for a new pair of shoes? 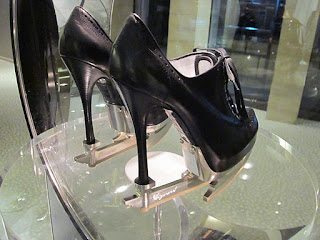 They'll run you a little less than $1500, that's all. What does a new pair of custom Harlicks cost these days? You get the blades included here. 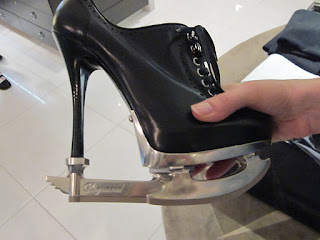 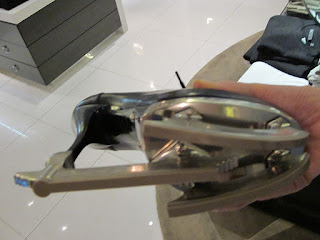 Strange blade configuration, but just think, if you took them out on a slippery, ice sidewalk, you'd get to work a little faster, no?
Posted by Ice Charades at 4:44 AM No comments: 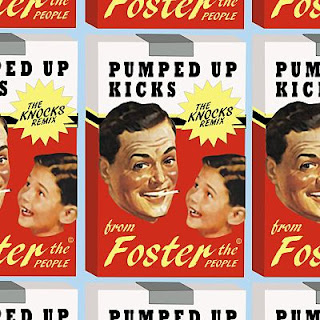 ... no matter how catchy or beautiful the melody.

I thought of this post last night when my husband was humming the little ditty "all the other kids with the pumped up kicks ..." by Foster The People. It's a catchy tune and I had neither listened to nor understood the lyrics. Then my husband filled me in.

So, here are the five songs, in no particular order:


1. Pumped Up Kicks by Foster the People

I'll let the great Wikipedia tell you why this boppy little ditty refers to homicidal thoughts of our delusional youth. Just best to stay clear of this altogether. Which brings me to the father song of homicidal youth ...

I love this song, but there can be no doubt how dark this song is. Enough said.

3. Mack The Knife by Kurt Weill and Bertolt Brecht

This was originally called "Die Moritat von Mackie Messer" in Threepenny Opera. It has been covered by many, joked about by Steve Martin and even MacDonalds, but the lyrics talk about a man who robs, rapes, and murders. Again, better to stay away.

4. Tomorrow Belongs To Me by John Kander and Fred Ebb from Cabaret

This is a beautiful hymm that any country would be glad to have for its own national anthem, except for one fact - it symbolizes Nazi Youth. Deal breaker, right there.

Unless you have the comic chops of Scott Hamilton, Kurt Browning or their ilk AND you use this song as an exhibition number for the coveted medalist performances on the Sunday after the competition.

Do you know of any songs that wouldn't be obvious right away?
Posted by Ice Charades at 4:18 AM 3 comments:

Did Xan just challenge me to a swearing contest?

Don't get it confused with her T-Shirt Contest right here.

There's some cross-promotion, right there.

So, if it is swearing you want ... how about my new favorite song. I just discovered it from the fabulous Wii - Just Dance 3 (please don't tell my daughter that what she's dancing to is not the original version). 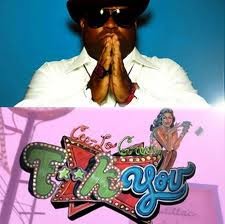 The song is so fun and boppy, someone described it as Motown mixed with early, angry Eminem. You may have seen the cleaned-up version on Glee or the Grammys with Gwyneth Paltrow, but I suggest you go straight to the video. So cute - a little like "Little Shop of Horrors" loaded with F-bombs.

So, if you laughed at the owl, I hope you'll laugh at Cee Lo Green's official video for his hit - F**k You.

Xanboni has inspired me to write down some goals for this blog for the new year. I'm impressed with all she has set out to do and I'm looking forward to the new website.

So, can Ice Charades stick to a New Years Resolutions this time? How did last year's goal go? Let's see ... my goal was to swear more. And truth be told, I sucked at it, didn't I?

But I just got carried away with this photo and couldn't help myself. And let's be honest, it is so much funnier when you say "the rest of the fucking owl" isn't it? 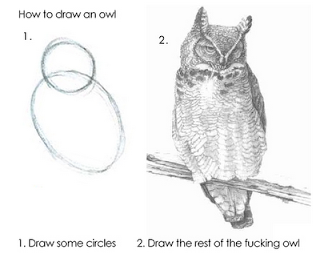 The picture is by Alexia Tsotsis, and the explanation on why it is so hard to become an expert comes from Ben Casnocha's blog, and I discovered the whole thing via the Daily Dish.

So for 2012, my resolution this year is to get more followers. Not sure if I have to steal them from another, more obscure blog, come up with an obnoxious contest to win you over or hijack the comment's section of another skating blog and shamelessly beg.

But perhaps the best way to get more followers is to write better, funnier posts. At least something kind of clever ... well hopefully, sort-of, maybe/kinda witty. I promise not to post another Ice Capades Reunion notice and then skate away. No more job vacancy posts without some chatty banter and insight included.

Happy Hell of a New Year!