Don't forget the reunion's coming up! October 18th! Email me if you need more details.

Remember kids, this is for the real Ice Capades, not the mystery tv show JoJo's been quiet about.

Anyone on the west coast should try to get on up there. You could see what tickets for the Olympics are going to cost right now!
Posted by Ice Charades at 7:39 PM No comments:

I just got a new driver's license today. I hope I never have to use it. I'm glad to walk here. The driving in this country is insane - one part video game and one part chicken. Stop signs in my neighborhood are ignored and stop lights are optional.

Yesterday, we witnessed a car make a left turn from the far right lane (of three lanes) during a red light. Why? Because he could, I guess.

It makes being a pedestrian here like playing a frogger. But I'm good at it. Why? Because I'm was a figure skater. Anyone who has been on an over-sold freestlye session knows.

You know how some people make it to the top of the escalator, take two steps and stop? And the same folks who drag heavy suitcases through the gateway at the airport and stop three steps beyond it to look for their next gate? These are not figure skaters. Figure skaters know that seats 23A through 40E are still walking off the plane. Figure skaters know what's behind them as much as what's in front.

I know there've been collisions from time to time, but that only makes us better for the next time. (Here's my alternate theory for another day .... just like drivers there are defensive and offensive skaters. Guess which ones win the medals? They manage to dodge or more likely intimidate the other skaters, avoiding puncture marks. Either tactic makes you a better competitor.)

But back to my first point ... Figure skaters are good in a crowd of people ... we can dart, dodge and bypass folks as well as any basketball or soccer player. Unfortunately, this is nothing you can put on your resume or even use to help pass skating tests.

But here, it helps me get across the street safely!
Posted by Ice Charades at 5:40 PM No comments:

Need a Job for Christmas? 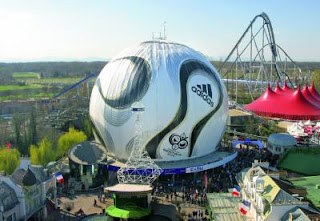 Germany's nice that time of year.
From Fiona Kirk of Global International Shows 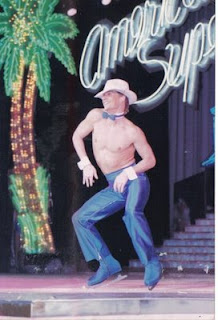 For anyone that knew Brian, they would know what a loss his death was to the skating community.
He was a fantastic skater, phenomenal choreographer, and as funny as he was smart. And he was very smart.
I know this is a cheesy picture, but it's from 1987. What do you expect? Even then, he had style.
I had the personal good fortune to skate in a show with Brian before he officially became choreographer to the stars and charged accordingly. We had a lot of free time in this show so he choreographed programs for me and others. It's too bad no one had a video camera at the time, because it showcased his range and talent as a choreographer.
His best work (although they are hard to pick from) in my opinion was Michael Weiss's long program to Santana. It was so fresh and original. I heard a rumor that the day Brian died (in Seattle) the fire alarm went off in Michael Weiss's rink (in Fairfax). Hmmm. Coincidence?
Well, I'll stop blabbing and let you read Christine Brennan's article on Brian in the USA Today if you want. One thing Christine, he was 42, not 43.
Thank you Brian for all the great memories on and off the ice!
Posted by Ice Charades at 6:28 PM No comments:

The Best Five Ice Show Themes on TV and Film 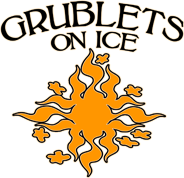 Well, I finally saw the movie "Blades of Glory" yesterday and it inspired me to put down my five top ice show themes from tv and movies ... it may be that there aren't too many more than these five out there, but here is what made the list.

5. "Jeffersons On Ice" from the movie King Pin.

There isn't much of a visual on this one, just a line near the end of the movie, "Look, the Jeffersons on Ice. I love that Sherman Helmsley." Makes me crack up every time. "Go, Weezy, Go".
4. "Smoochy On Ice" from the movie "Death To Smoochy"
This ice show gets much more play in this movie and though the Smoochy character, which is suppose to be a parody of Barney, reminds me more of the Smurfs from Ice Capades. Never mind it's a children's show, the ice show theme steals a sequence straight from the film "Manchurian Candidate".
3. "Krusty On Ice" from the Simpsons
The opening of this episode shows Krusty at the center of a pinwheel with all the skater babes in line around him. My favorite part of this show is when the crew comes in during the second half to tear down the ice to put in the basketball floor.
2. "Grublets On Ice" from the movie "Blades of Glory"
Obviously after the Jeffersons and Smoochy, they had to ramp up the "D-list ice show" theme, so "Grublets On Ice" was a pretty good choice. While I never personally skated as or with the "Evil Wizard" (Will Ferril's character), I have felt like throwing up in my skin (a.k.a. character costume) before.
and my #1 Fake Ice Show Theme from tv or movies?
1. "Ice Capades - The Reality TV Show" with unknown skaters, judges (except for JoJo Starbuck) and tv network.
This one hasn't even aired yet, so I really shouldn't compare it with the other four. Perhaps the real show will be behind the scenes of the lawyers as the old owners/producers of Ice Capades sue the new ones.
Stay tuned!
Posted by Ice Charades at 12:48 PM No comments:

Thought I should pass this on from Gloria Spoden

I know that not everyone is signed up on the Ice Capades Performers site, but thought you’d like to know that there is a mini-reunion coming to the Vancouver area on Sat. Oct. 18th.

Just thought I’d pass it on as it would be fun to meet more alumni and get a taste of what’s to come when we meet for the big reunion in 2010.

If you know of anyone who lives in the Vancouver or Seattle areas, please forward this on to them as I’m sure there are more gypsies out there who would like to get re-connected.

2010 will be upon us before you know it. Details will be out as soon as we get the cruise schedule.

Posted by Ice Charades at 7:19 PM No comments:

Rachael Flat with Band Together 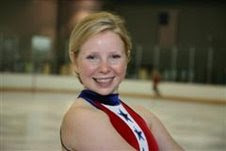 I know you've read about her and seen the famous braces all over the place, but I wanted to mention it again, since she was a guest skater at the Ice Capades Audition show with JoJo Starbuck, as reported by LakePlacidSkater.
I know, I know, I can't get enough of Ice Capades coming back. As I predicted in this older post!
But I never thought it would be so in terms of a reality tv show. Then again, what haven't they done in a reality tv show yet? Did any of you catch "Skating's Next Star" on the WE network? I'll save that for another blog ...
Now back to Rachael and those fabulous braces ... She's a figure skater, orthodontic patient and 2010 winter games hopeful - urging the 5 million plus North Americans with braces to flash their pearly whites, reds and blues in support of Team USA. She is ‘Banding Together’ with the American Association of Orthodontists (AAO) to support Team USA by wearing patriotic-colored bands on her braces.

You can find out more about Rachael and the ‘Band Together’ campaign at www.braces.org/bandtogether
Posted by Ice Charades at 12:04 PM 1 comment: