Welcome to the Holiday Season - have you recovered from Black Friday?

Did you buy all of your presents yet? No? Well, if there's still that one skating fan on your list, here's your chance to get Ice Charades for 30% off in honor of Cyber Monday. Yup, for 3 days only starting Nov. 30 - that's 30% off.

Use this coupon code VHPVQPKR at this site and happy cybering.
Posted by Ice Charades at 10:45 AM No comments: 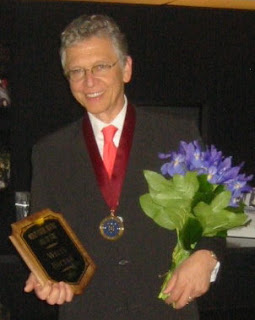 It's one of our own in the WFSHoF!

Okay, okay, so Willy Bietak is more of a producer than a show skater. And I know he was nine-time Austrian Pair Champion, so he's got all the Olympic props, but it is still cool that show skating is getting some cred in the WFSHoF.

But don't take my word for it ... here's the article written by Sylvia Froescher.

ProSkaters Producer Member, Willy Bietak was inducted into the World Figure Skating Hall of Fame in Category C for outstanding contributions with a creative/professional impact on figure skating.
Willy Bietak is only the second Producer to be inducted into this illustrious group of the skating world’s elite icons.

The gala event, hosted by Dick Button, took place at the Wilshire Grand Hotel in Los Angeles, California on March 28, 2009 as part of the week long World Figure Skating Championships events. This followed the on ice ceremony at Staples Center where International Skating Union President, Ottavio Cinquanta bestowed the 2009 inductees with their medals and plaques. Other inductees included Nikolai Panin-Kolomenkin (Russia), Aja Zanova (Czechoslovakia) Joyce Hinsey (Canada), Barbara Underhill and Paul Martini (Canada) and Brian Orser (Canada) .
It was a star studded skating event with a room full of past and present Olympic and World Champions. Here are just a few of the long list of the champions that were in attendance. Brian Boitano, Michelle Kwan, Kristi Yamaguichi, Dorothy Hamill, Tara Lipinski, and Debi Thomas, along with newly crowned 2009 Ladies World Champion, Yu-Na Kim.

Willy Bietak has had 40+ years of involvement in the sport of skating. He owns a record-setting nine consecutive titles (1963-71) as an Austrian pairs champion and is a former European, World and Olympic competitor. Along with his amateur skating resume, Willy Bietak Productions was founded in 1986 in Santa Monica, California. Willy Bietak has produced many ice skating spectaculars and his credits include many innovations in show production. His company is responsible for the production of ice skating shows for Royal Caribbean Cruise Line’s mega ships. He was the first to move figure skating productions from the traditional arena to legitimate theater, with “Festival on Ice” and “Broadway on Ice,” which have played such prestigious stages as the John F. Kennedy Center in Washington, D.C. Willy Bietak Productions, in collaboration with the Montreal Forum, produced and directed “Le Ice Show,” a one-of-a kind performance that became one of the top-grossing arena ice shows that year.

Here is what Willy Bietak had to say about this special award. “This is a great honor, especially considering the company I keep with the other inductees this year and all other past inductees, for that matter,” Bietak said. “It is one thing to experience a great audience ovation for shows I produce but yet another to have this honor bestowed by my peers – for once I am speechless.”

Posted by Ice Charades at 9:59 AM No comments:

what age is appropriate to read your book?

I'm so glad you asked because dozens of people heard the title "Ice Charades" or thought the topic of figure skating was for young adults or teenagers.

They think back to their days as kids when they went to the Ice Capades and got to ride on the sled or train or whatever that Smurf-thingy was, and they think kids. They remember watching Tara Lipinski or Michelle Kwan or even Sasha Cohen (who looks young)skate on TV and think little princesses.

This book is definitely for adults not teenagers.

Wikipedia defines the Young Adult fiction genre roughly for ages 14 - 21. Wow - how different I was at 14 compared to 21. World's apart.

You ask, what about my 17-year old? (S)He's thinking of going into an ice show? My honest answer would be yeah, (s)he should be ready for the adult life in an ice show, so this would be okay.

What's In A Name?

The Urban Muse posted a blog on the same subject I was working on ... how to name your blog. She has some great tips if you are working on a name for a blog, book, song, etc.

I must admit, I never thought of alphabetical placement. That might have been smart. Maybe Aaron at Axels, Loops, and Spins can weigh in on that. I did keep the name short and sweet. Most of all, I wanted it to be catchy.

So I googled "common phrases" and worked my way down the list, but nothing was remotely related to skating. Then I thought of Ice Capades and charades and voila!

But when I started setting up this blog, I discovered I wasn't the first to think of Ice Charades. A kids' tv show from Canada had beat me to it! Foster's Home For Imaginary Friends - seems to have "Going to the Ice Charades" as a reoccurring theme ... but luckily, we can share the title. I love the little intro here.


Now, if there were some way I could work this into the trailer for my novel.
Posted by Ice Charades at 8:33 PM 3 comments: 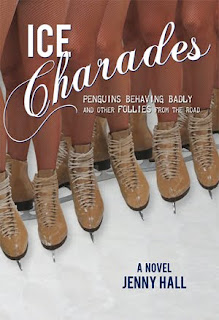 Yes, Miss Ice Charades has spent the last five years fine-tuning a novel about skating in an ice show and it is now out on Amazon.com and the publisher's site - Createspace.com with a 10% discount.

If you've been checking in with this blog for any of the past year and a half, you have gotten a taste of what's in the book. But for anyone that wanted more ice show wackiness mixed in to a juicy little plot, here you go.

It's based on my experience with ice shows, mainly my first one in Europe in the early 80s for Holiday On Ice. Because you never forget your first.

But seriously, the book might serve as a source of information for anyone that wants to join an ice show - points both good and bad. And even though it takes place in the early 80s, only the gear has changed. Instead of Skype, IPods, internet and Visa, we had letters home, more letters, Sony Walkmans and more letters home asking for money.

But don't take my word for it. Here is what two authors said, who graciously read advanced copies of the book. By the way - shameless plug alert - their books are also available on-line. Just follow the links below.


"This book is a charmer. Jenny Hall has crafted a delightful coming-of-age story of a young woman and her sometimes comical, sometimes heart-wrenching journey to find love and ultimately herself. You don't have to be interested in figure skating to appreciate the colorful characters and their adventures on the road trip of a lifetime."
Nikki Nichols Cunningham, Author of Frozen in Time: The Enduring Legacy of the 1961 U.S. Figure Skating Team

"A lot of fun to read. It takes me back to my pro skating days!"
Kathryn Bertine, Author of All the Sundays Yet to Come and As Good as Gold
Posted by Ice Charades at 8:27 PM 9 comments:

One of my favorite radio shows comes from the Washington DC area that I used to listen to all the time when I lived there. It was Andy Pollin and Steve Czaban (pronounced like zaBAN)of the Sports Reporters on ESPN 980.

Even though I don't follow (or care much for)college football or basketball, I would still listen to them regardless of the topic.

Some of Czaban's classics are the rundown of the best Halloween candy, which holiday is better - 4th of July or Thanksgiving, and the "You Tell Me ..." if you had to do one of these which would it be: a fastball pitch to the thigh by Nolan Ryan, a full body tackle by Lavar Arrington (then football player for the Washington Redskins) or a punch from Mike Tyson?

Despite the fact that two of these could be fatal to your average Joe, it was fun to hear listeners call in and explain their answers. Most wanted the fastball.

Then he had the special Winter Olympic version of "You Tell Me", which would you rather do: the giant slalom, the luge run, or jump of the ski jump?

So I thought I would do the figure skating version(and let's leave out the bodily injury factor.) You Tell Me, what would you rather do (or in this case, feel): a quadruple toe loop, a detroiter(pair spin), or a really fast scratch spin?
Posted by Ice Charades at 2:52 PM 4 comments: