They've already had the premiere in Sydney.  The movie comes out in theaters in Australia on April 6, 2017 and I'm dying to know when it will be released on Netflix or better yet, come to the theaters in the States.

I've written about this in two previous posts, but I'll say it again, if you're a fan of figure skating, you will probably love the tv series Dance Academy too.   All three seasons are available on Netflix and now on You Tube.  I suggest you start at the beginning, but you'll still get sucked if you wandered in at Season 2.

My personal theory on why this show is so popular, compared to all other dance movies/tv shows, is the writing is so strong.  It's realistic and the characters are three dimensional.  They are not just all sweet or totally evil, completely talented or robbed of their title - and they are growing up besides.  There are so many parallels to figure skating, either the side competition or performing, that you'll be swept in.  I promise!
Posted by Ice Charades at 8:52 AM No comments:

This Aint Your Mamma's Synchro Team 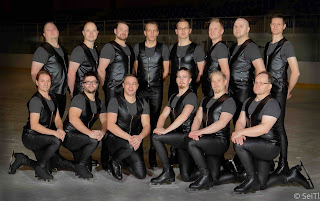 Ladies and Gentlemen, may I introduce the River Bulls, from Finland.  They are the only all-male synchro team and they were founded in 2014.

Let Matti Heinonen, one of the team's member explain:


It all began season 2013-14 when two of us were waiting and watching our daughters' rehearsal.  Suddenly the other one said:"That seems to be so easy, maybe we should try it too?  We know how to move in blocks because we have been in the army."  From this moment the idea started to live in our minds and after some months the first skating courses for men were arranged. 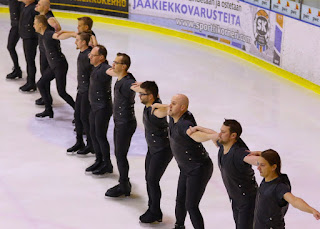 It doesn't sound like they are heading to the 2017 World Synchro Championships in Colorado Springs next month.  But neither am I ... as a spectator.  I would love to see Worlds!  If any of you are near Colorado Springs on April 7 or 8, you should go!!!