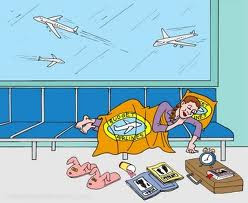 ... is called The Guide to Sleeping in Airports and I only wish is that it had been around during my show skating days.

I'm sure many show skaters have had to do this often.

In fact, I skated in five different shows in Japan and only one of them paid for my ticket all they way from my home base. For the other shows, the producer said show up in Vegas or LA on your own and we'll fly you to Japan from there.

For anyone coming from the East Coast or Midwest, there was no way to get to LAX in time for the 1pm flight to Tokyo without staying overnight. For me, a hotel room and a cab or bus to get there was out of the question.

In fact, I left the airport in Minneapolis-St. Paul with my last $25 in my pocket. (It was 1989, so that could buy you a little more than today's bottle of water and a large bag of M&Ms.) And I had done the same park show the previous summer, so I knew once I got on the plane, there would be food. There would also be food waiting for us at the amusement park.

Otherwise I might have borrowed another $25 from my mom.

On that particular airport sleepover, two other skaters, from Hamilton, Ontario, also planned to spend the night in LAX. We hadn't met before, so I didn't realize we could have teamed up for night watch duty or something.

They got robbed that night (if you go to the website, you'll see that LAX is #4 on the Worst Airports of 2010!). Luckily my last $25 covered us all for breakfast the next morning.

So these tips -- alas, 22 years late -- are for you, Joyce and John, and the hope that no more figure skaters get robbed when sleeping in airports.


Tips for not getting robbed in your sleep 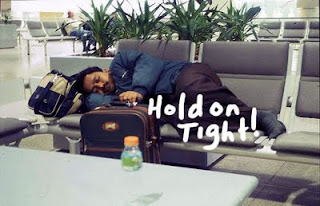 Posted by Ice Charades at 6:06 PM No comments:

I was watching the two matches in yesterday's Gold Cup. The U.S. victory against Jamaica and then the El Salvador vs. Panama match up. And by then second overtime, it dawned on me that the goalie for Panama, Jaime Penedo, looks a lot like Evan Lysacek, don't you think? 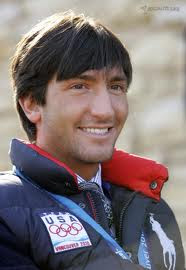 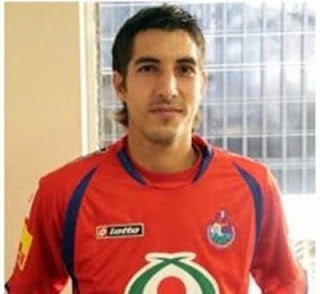 Perhaps I have way too much time on my hands right now. Have a great week!
Posted by Ice Charades at 3:14 PM No comments: 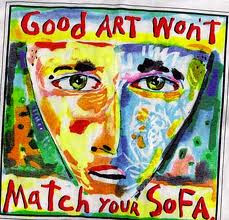 Whether or not you agree with that statement, you would agree that somewhere in the Art Buyer's Manual you should at least see the painting before you buy.

Let me back up for a minute: After living in Mexico City for two years without a car, I had a little spending money to kick around. Our neighbors rented out my unused parking space too. Money saved and money earned. Nice.

So my husband and I decided to buy a painting. Well actually, I came up with the idea and he agreed. After visiting Toller Cranston twice and seeing all of the paintings in his fabulous 15-bedroom villa, you come away wanting a painting. Trust me on this. 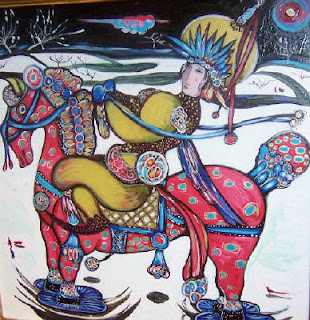 I should have bought something when we were visiting. Something that would fit in a carry-on, considering how often we move. Three times in six years. Three different countries. That would have been the smart thing to do. 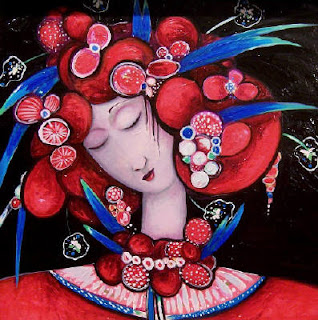 So here's the thing if you're thinking of buying a painting from Toller - no computer. The only paintings he's done that you can see on-line are already in galleries. Such as the post from last week.

So, instead, when Toller tells you, "I know the perfect painting for you." You try to say no.

Should have said, "Let's talk about this, first."

But here's the other thing about Toller - he can move product. After another phone call and a couple of emails from his business manager, the painting was on its way. 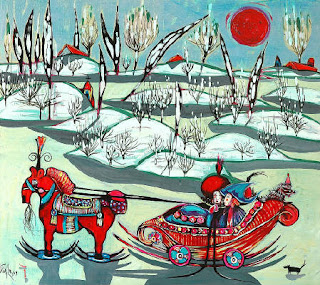 So back to my original point: I bought something sight unseen. What if I didn't like it?

There are a few that I don't care for. And of course, my husband gave me that what-were-you-thinking look, but he didn't say anything.

Toller called twice to see if the painting had arrived before it did and it dawned on me that he too was nervous.

Good news - I do like the painting. There was no hesitation telling him how much I loved it when I called him back. He said it had come from his living room.

The painting is similar to this one and I hope to post it on-line one day, but right now it is unceremoniously hiding in its box in the storage room because we have no way to hang it here. 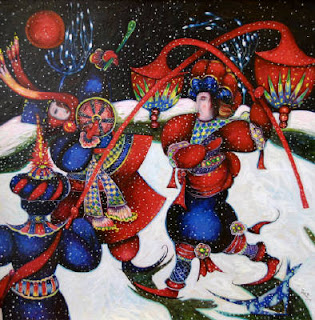 Good news again - we're moving soon. We don't know where yet. Two possibilities right now, so I'll let you know when we get the go-ahead.

I just hope that wherever we go there's a wall worthy (and a hook sturdy enough) of this painting.
Posted by Ice Charades at 4:33 PM 1 comment: 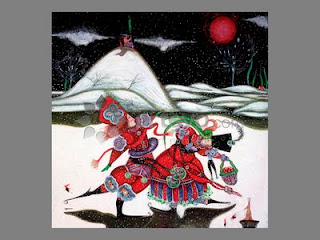 Toller Cranston is live and in-person at the Terence Robert Gallery in Ottawa, Canada today. Click here, to see wonderful examples of his work.

If you're in the area, stop in, say hello, buy a painting. Tell em' Ice Charades sent you.

The exhibition continues until June 27, but Toller will only be around for today and tomorrow. Though there are going to be lots of skaters crowding around him, since the Fans Of Toller Facebook page has gotten the word out.
Posted by Ice Charades at 10:55 AM 3 comments:

The seminar if FREE for ProSkaters members.

The ProSkaters Annual Seminar just became more valuable! Karen Kresge, of Woodstock Ice Productions and Sylvia Froescher, of Willy Bietek Productions, are two of the major producers who will be in Sun Valley conducting live auditions. Mark your calendar for July 27, 2011 to participate in ProSkaters 8th Annual Seminar. The seminar will include on-ice and off-ice programs and runs from 6:00 pm until 8:15 pm on Wednesday, July 27. Cost is FREE for members of ProSkaters. Others pay $75 with pre-registration ($90 at the door).
Highlights include:

And so much more!

Register for the seminar early to make certain that you have your spot reserved!

Posted by Ice Charades at 10:41 AM No comments:

Today is 'The Day of Hazma'

I don't normally talk about things other than figure skating.

Are you kidding me, Ice Charades. You're lucky if your post has anything to do with figure skating.

Okay, okay, very true. And because there is not much going on in the skating world these days, I want to turn you attention to a serious matter.

Today is the Day of Hazma and I hope it gets the Syrian government to sit up and take notice. Full disclosure: I went to Damascus, Syria for three weeks on a business trip back in 1999. I loved the country and the Syrians I met and worked with. They were wonderful. That's why I'm so concerned.

So, I'm hoping you'll take a moment to "like" the "We Are All Hamza" FB page and let's see what the internet can do.
Posted by Ice Charades at 11:51 AM No comments: 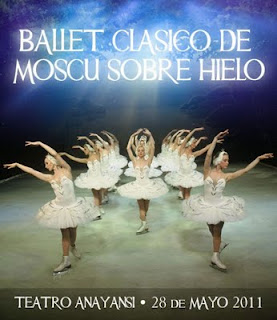 ... is coming to Panama! It's coming soon and it will be across the street from my apartment. How convenient is that.

But the date on the ad above says May 28. That was the date given the second time it was mentioned in the local newspaper. The first time, there was no date listed. So I looked it up on line and it says June 5, 6, and 7. But then the next paper said postponed until June 9. What to believe?

Two weekends ago we went to a dance concert at the National Theater. The paper listed the performance starting at 6 pm. Online it said 7 pm. When we got to the theater, I asked the women at the box office and she said, "In twenty mintues." That would put the starting time at 6:30. For the record, the show started around 6:45.

I'm used to that now. It's a Caribbean thing, I'm guessing.

So I'm going to find out about the Moscow show the old-fashioned way. I have to keep my eyes peeled for the trucks and the compressors to roll in and then I'll know the ice show is in town. Luckily I can see that out of my window.
Posted by Ice Charades at 5:16 PM No comments: