I saw Alice in Wonderland yesterday with my daughter and while I wouldn't declare it, "the best movie I've ever seen" like she did, I thought it was really good. But I don't think it will translate into one of Disney On Ice's (DOI) better shows.

Here's why - in my opinion - two reasons ... 1) the movie itself is visually stunning. All those CGI (computer graphic images) were impressive and I'm not even talking about the 3D aspect. After a while, I forgot the movie was in 3D. But all of the different animals, the castle grounds and woods, the costumes - were so creative and colorful that they'll get lost on a sheet of ice. 2) the music doesn't lend itself to DOI. I can't think of where the chorus numbers are, where the pair number is ... etc, etc.

I think DOI has a better movie to turn into an ice show - The Princess and the Frog!

It may have something to do with the fact that I saw this movie in Spanish, so I couldn't follow half of it, but I was already choreographing it in my head while I watched it. There are two meaty roles for some great up-and-coming black skaters. Or maybe Rory Flak-Burghart will come back. She'd be awesome as Princess Tiana.

Of course, I bet the time the prince and princess are frogs on the ice will be the pair team (adagio team) and it won't matter the color of their skin. It will probably be some unknown Russian pair that will blow us away with their amphibian jumps and lifts.

And of course, there's the music from Princess and the Frog. It will be easy to put to the ice. Very catchy tunes - slow, fast - chorus numbers, solos and duets, everything.


Hmmmm, I wonder if they already have it drawn up on paper right now.
Posted by Ice Charades at 8:24 PM 1 comment:

Today is the Grand Opening for the website, so check it out ...

The site is the brainchild of Ryan Jahnke, the 1993 National Novice Champion.

You can follow Ryan's blog to keep up with events, ask questions, and give your suggestions.

Let's help make this a great success, so more kids will be able to skate.
Posted by Ice Charades at 10:34 PM No comments:

Yesterday Miss Ice Charades and the family decided to go skating. In three months we are moving to a country with NO ice rinks, so I'm now feeling like I should take my daughter skating while I still can.

Unfortunately, there was a skating competition going on (on Sunday morning?) and we didn't get on the ice. But I realized that despite the fact that the announcer was speaking Spanish and the competitors had dark hair, figure skating competitions are pretty universal. Ice Girl would have felt right at home.

So I went to the bulletin board to check out next week's schedule and saw the March calendar had a quiz at the bottom. Can you compete with the Lomas Verdes Skating Club challenge? Here you go ...

The Year That They Won:


I bet a lot of you readers out there don't even need the years listed, but I must say without process of elimination, I wouldn't be able to tell you what year Jeanette Altweg won. Good Luck!
Posted by Ice Charades at 11:15 AM 4 comments: 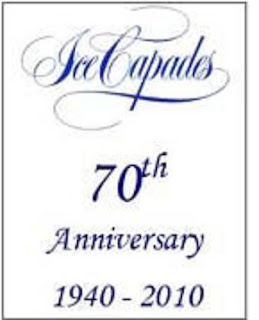 The deadline for the early bird rate is this Sunday. If you're wondering whether to go or not ... just go, just do it, you'll have a great time!

It's this June 21-22, 2010 at the Treasure Island Hotel and Casino in Las Vegas. Where better to see ex-showgirls than in their natural habitat - Las Vegas!

Here's where to go if you need more information: CAUTION - if you click on this the music to the 1968 Opening will start up.
Posted by Ice Charades at 12:32 PM 1 comment:

Here's a great website for performers ... okay, it's mostly for dancers, but they let skaters in too. And they have a big database for finding ice shows. Go ahead, click on the Find A Show button, then click on Ice Shows and you're off.

You can find Holiday On Ice going back decades. Not all of the shows have video, but each HOI show lists the cast and crew and the themes. Disney On Ice and Bietak Productions are in there too, although there are not as many details.

It's free, so go ahead and register!

Do you think they would let me go to the Bluebells/Kelly Boy Reunion in Paris in June? I never danced (topless or otherwise) at the Lido, but I did get backstage one time to visit a friend.
Posted by Ice Charades at 11:03 AM 2 comments:

This just in from the PFSC ... let's get the word out!

The 2010 Virtual Skate Off has just been launched!

Check out the updated site at www.virtualskateoff.com

New for this years competition....

20 Celebrity Judges to place Top 3! Check out the site to see this list...it’s the most famous skating judge panel ever! The list includes Kurt Browning, Elvis Stojko, Todd Eldredge, Kristi Yamaguchi and 17 more!!!


You have 2 months to create a new program OR you can enter any recording POST Jan 2009.

This is an amazing opportunity for you to promote yourself as a PROSKATER!


What a great way to get a FREE membership too:

If you have any questions feel free to e-mail proskaters@virtualskateoff.com.

A View From Japan

As Required Elements commented on the tensions between the Asada-Kim rivalry that was noted in this CNN article here I was already ahead of these guys. Just after the final results for the ladies I asked a first-hand source - my girlfriend, who's lived in Japan since 1994 - for the view from Japan. She is not a skater, but the fact that she is so well informed shows you how big a deal this was in Japan. She replied back to me:

I am sure Yu-Na Kim was under much more pressure countrywise. The feeling in Japan is mixed because expectations were so high, but in general, the press hasn't been overly negative. For normal Japanese people, there's definitely a sense of disappointment. Many feel that her routine did not match the venue, and because it was strong on technique but perhaps lacking artistically (Olympic feel), she fared less than Kim, who is more attuned to a North American/Western Europe style versus an Asian/Russian style. Asada's ability to do a triple axle multiple times during the Olympics versus Kim's "less difficult" triple lutz definitely was pointed out. There's also a lot of grumbling about the judging system. Asada said that she'll be back to try for the gold, so the fact that she's not giving up is appeciated by the Japanese media and public.

p.s. If I had a friend in South Korea, I would have also asked them their thoughts. Sadly, there is no South Korean Bureau Chief for Ice Charades at the moment. Stay tuned ... 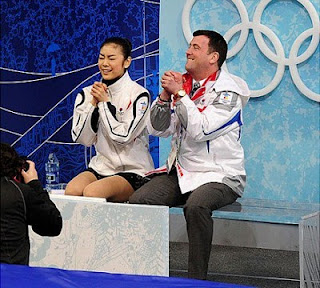 By all accounts, it was an incredible night of skating from ALL of the ladies. I was very happy because the judging seemed fair.

But I have to be honest, I was also very happy for Brian. If you are able to catch the end of Kim's long program, you can see Brian right behind her at the boards, waving his arms in excitement. Very exciting!

I told you in the last post, what a classy guy he is and this video proves it. What is amazing is the interviewer, himself a Canadian, didn't know who Brian Orser is ... until now. Check it out ...
Posted by Ice Charades at 10:32 AM No comments: