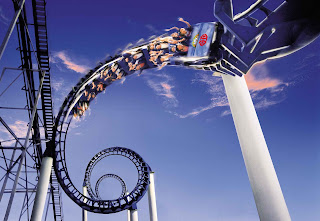 ... and that means somewhere there's an amusement park with an ice show.

And probably groupies. Love the groupies. In Japan they gave us packs of gum or bags of potato chips, but that's another story.

Most of the amusement parks with ice shows are in the US, but there are two in Germany. That's my turf for now.

So, I'm excited about seeing an ice show and what do I discover? They're Doing It Again ... again. I railed on the (lack of) advertising of ice shows in amusement parks in June 2008 and then again in August 2010, so I think it's time to tell you the PR Department still hasn't gotten the memo.

Excuse me, Miss Ice Charades, but what are you mumbling about this time?

Why is it the ice shows in amusement parks or on cruise ships never get the advertising they deserve? This time I'm talking (ranting) about Phantasialand, in Germany. If you went to their website, you'd never know they have an ice show. If you clicked into the country within the park where it's playing (Mexico), you still wouldn't know there's an ice show unless you scroll down and click over the small pictures.

How do I know then? By reading the most awesome new skating blog Is That A Skate Guard In Your Pocket Or Are You Happy To See Me?, by Ryan Stevens, that's how. In my last post I raved about Ryan's blog with the interview of Anita Hartshorn on June 1. FYI, that was about twelve posts ago ... just skip to "older posts" and hunt from there.

Really, you should leave this post now and start reading his if you haven't checked it out yet.

Thanks for coming back, I'm almost done with the rant.

But it's so infuriating because the ice show is usually one of the most, if not THE most popular live show in the park. And in Phantasialand, based on reviews from Trip Advisor, this ice show is no different. Yes, I went trolling through Trip Advisor to read about the ice show. 99% rave reviews. But that's a lot of work.

So thank you Ryan. If you hadn't posted the interview I wouldn't have known about the show and now I've put it on my schedule for August.
Posted by Ice Charades at 11:44 AM No comments:

Is That A Skate Guard In Your Pocket

... or is it one of the best figure skating blogs ever?


Is That A Skate Guard In Your Pocket Or Are You Happy To See Me? by Ryan Stevens has got to be bookmarked by every skating fan out there.

It's like if Axels, Loops and Spins, Aunt Joyce's Ice Cream Stand, and Randy's The Rink all got together and had a baby. Auntie Ice Charades is standing by the boards in awe.

My bestest skating friend sent me the link to his blog two days ago and now I have some catching up to do. He started his blog in February, so there are five months of amazing blog posts to dig into. And, like Aaron did, he pastes the videos right into the posts, so they are at your fingertips.

And we need this.

It's no secret that most of our beloved skating blogs have died (I bet you can't, for the life of you, understand why this blog has dragged on and on) but Is That A Skate Guard In Your Pocket Or Are You Happy To See Me? has come to save the day.

Posted by Ice Charades at 6:02 AM No comments: