While everyone is talking about Korean TV, I promised a little shout out for Japanese TV.

Of course, I'm not talking about a show currently on TV. Ice Charades deals in the past. That's why I don't twitter, my best stuff comes from 2 decades ago, not 2 hours ago.

So back in 1987 there was one show that we discovered that was an instant hit with all the skaters.

So, we made duplicate video copies before our contracts were up, and when we got back to the states we were ready to show our friends and relatives our prize from Japan. I'm serious, this was as good as any Kimono or pearl necklace you could bring back.

And Charles, if you're reading this, I'm still waiting to get back the special Foreigner Episode I loaned you.

Thank God we have You Tube today.

It was a crazy show where the Japanese (and occasional foreign) contestants had to go through dangerous stunts to make it through to the finals. It usually involved dodging giant bolders, swinging ropes, or characters dressed as monsters and ended with the contestants landing in water, or worse, mud.

Think you know this show? If you've ever watched Spike TV, you'll know it by the name of Most Extreme Elimination Challenge. Somebody at Spike realized the genious behind this show and re-aired it, dubbed over with funny, dialogue in English. But even in its original format, it was still hilarious.

This show only lasted until 1989 in Japan. It's star, Takeshi, had so many TV shows airing at that time, that we figured something had to go. Or maybe one of the contestants was paralized doing a stunt and they had to shut things down. Who knows.

But it put Japan on the map for some of the craziest stuff you would ever see on TV.
Posted by Ice Charades at 8:24 PM 1 comment:

Since my daughter has the next week and a half off of school - like a snow day on steroids for me - I have naturally thought about how much of my work will get done vs. how much TV she'll be watching.

Answer: probably too much (tv that is)...

We get cable down here, so there is Disney, Discovery Channel and Nickolodean with all the familar shows. But there is one show we get that we never saw in the U.S.


Hey, Ice Charades, what does this have to do with skating?

Not much, thanks for asking.

Here, we get the show, Pucca and my daugther loves it. (Please email if it is airing in the US).

It's from South Korea and it's about a talented little gal who always comes through in the end to kiss her man.

Perhaps Pucca has been overshadowed lately, due to another talented gal from South Korea, who came through in the end.

For fair and balanced coverage, stay tuned for my next post when I talk about some of the best Japanese TV I've ever seen!
Posted by Ice Charades at 11:21 PM No comments:

Good to be back and catching up on all of the skating blogs out there. Thanks for coming back to mine, too.

Yup, Ice Charades to the kid to the House of Mouse - Walt Disney World itself. And just in time, because my 5-year old now tells me she doesn't like the Disney Princesses anymore.

Well, she certainly was happy to see them after waiting in line (only 20 minutes, which isn't too bad actually - the line for Tinkerbell was more like 45 minutes).

I must say, I was impressed that all four princesses - Ariel, Cinderella, Belle and Sleeping Beauty did a good job of seeming interested in each little girl they posed with. After you seen hundreds (thousands?) a day, it must seem like a blur. It must be hard to stay in character.

Who knows what Mickey is mumbling to himself at the end of the day?

Where are you going with this, Ice Charades? 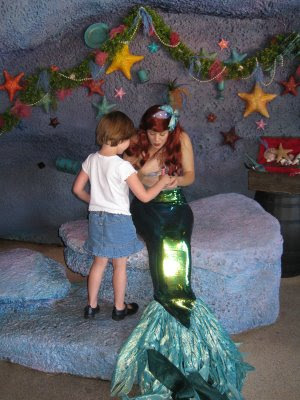 Seeing the princesses pose for photos reminded me of a show I did in Atami, Japan where we posed for photos and sold T-shirts to the audience before and after skating. While we never came close to the numbers these princesses see in a day, I must say we still got good at smiling. You don't want to waste Polaroid film - that stuff is expensive in Japan.

Was it cheesy and artificial? Sure. Did I feel like a shill? You bet. But we made a commission from our sales, so I smiled away, happy to be selling out.

I hope the Disney Princesses are making a commission off of the sales of their photos. That would explain why they didn't rush the kids through, instead engaging them in conversation ... perhaps to get more photos for parents to buy.

If they aren't making a commission, I'm doubly impressed. The House of Mouse has some magic charm indeed!
Posted by Ice Charades at 10:52 AM 1 comment:

I'm still in the middle of vacation, but I got this from a friend. Sadly, this is not the first time skaters have been stranded ...

Ice Capades performers prepare to leave Williams Lake for Vancouver to regroup after show organizer Niles Garden left them stranded Tuesday morning. The performers were left without pay, and are uncertain how they will get home. Ice Capades shows in Prince Rupert and Prince George are cancelled.

I'm so bummed, I'm not including the picture of those really tall, creepy skaters from Ice Capades. If you want to see them, click here.

If you purchased tickets to any of the rest of the shows - read below ...

THE ICE CAPADES WILL NOT BE COMING TO PRINCE RUPERT. THE EVENT WHICH WAS SCHEDULED TO PUT ON TWO EACH DAY ON APRIL 8TH AND 9TH HAS CANCELLED THE REST OF ITS CANADIAN TOUR. THE ICE CAPADES PERFORMED THEIR LAST CANADIAN SHOW IN WILLIAMS LAKE LAST NIGHT THEN PACKED UP THEIR BAGS. ANYONE WHO HAS PURCHASED A TICKET WILL BE ABLE TO GET THEIR MONEY REFUNDED. TICKET HOLDERS WILL HAVE TO CONTACT THE ICE CAPADES MAIN OFFICE IN SARASOTA FLORIDA OR GO ONTO THEIR WEBSITE FOR DETAILS.

I started the blog. Yup, it's Ice Charades birthday.

And that's no April Fool's joke.

I want to thank everyone for the encouragement and nice responses.

I wish I had time to savor the cake and champagne (and now I can feel free to have that stuff - no weigh-ins) but I'm leaving on vacation this morning. I'll try to post when/where I can, but no promises.

Once I return, I've got new exciting ideas to try to keep you entertained during the downtime in competitive skating. Is there a downtime?

Today, I can leave you with an April Fool's joke I found pretty funny. If memory serves, one day Lisa Marie Allen told everyone in the middle of a rehearsal that she lost her contact lens on the ice. All the skaters were down on hands and knees feeling the ice for that little critter when she stood up and yelled "April Fools".

Feel free to use that one.
Posted by Ice Charades at 9:04 AM 1 comment: