It was one year ago since I've been skating. I never thought I'd actually skate in Panama - not much of a skating tradition there. Years earlier, they put a sheet of ice in a shopping mall, but it didn't catch on. Somehow the marketing and the mood was better last year when they installed the ice at the mall down the street from me. 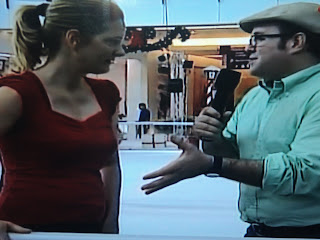 
"In Spanish?" I asked in Spanish while I made a funny face.

Sure, why not. It was unfortunate that I hadn't performed in fourteen years and I was quite rusty. Couldn't skate more than forty seconds without getting winded.

But I did my best. Here's the part where I show the kids how to do swizzles. 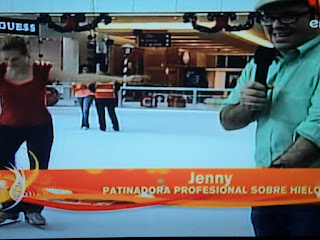 How cool is it that I got the chyron treatment, Jenny - Patinadora Profesional Sobre Hielo? That translates to Jenny - Professional Ice Skater, if your Spanish is as bad as mine (used to be). 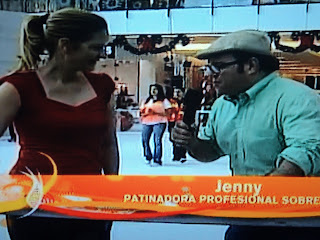 It's hard to top a skating day like that when you get interviewed on national television and it is part of why I haven't skated since. I could leave it there and feel good about my quasi-career in ice shows.

But that's the problem with ice shows and skating in general. It is hard to walk (shall I say skate?) away for the last time.

So if I skate again, you'll be the first to know. But regardless, here's to a great 2012 for everyone. 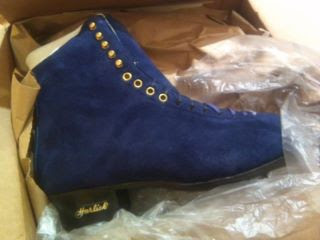 ... apparel. And I'm not talking about my friend's new blue-suade skates. They are so gay.

But they are so cooooool!

Well, last year I got an Xmas card from a guy I skated with twelve years before that. He was about to get married and I skated in two shows with him and his then girlfriend-soon-to-be-wife.

They got married, years later they got divorced, and to this day my friend is still single. (The ex-wife got remarried, had kids, and I think all is good with her.)

So, I must say I was surprised when I opened his annual Xmas card and this time it was from him and his friend, let's say Steve*.

*not his real name

Then I was not so surprised, because I felt he was happy again. Ready to let everyone know. He certainly had a big smile in the picture.
Posted by Ice Charades at 2:40 PM No comments:

I'm looking to score one, please.

I've seen other blogs, especially parenting blogs, and they get them. All sorts of fun stuff.

Xanboni got one for the Halo.

And it's that time of year when everyone's looking to buy a Xmas or Hanukkah gift.

Then I got to thinking and I'm not sure what products a showgirl could really get a leg up on, except for maybe Capezio or Danskin fishnets. Back in the day when I skated with HOI or in Japan, I couldn't buy them at a store, so they were coveted items, doled out once every six weeks or so.

That meant you had to treat them with great care. Throwing them away was not an option. Sewing up the holes was necessary, even though I was never good at it. See that post here. I outsourced that job.

I suppose that we could tell you all about false-eyelash glue. That probably wouldn't be too valuable for the once-or-twice-a-year wearing for your average party girl. But for models or strippers? I would especially endorse any glue that didn't give me a terrible rash.

But now that I think about it, I suspect the false-eyelash glue guys would prefer to talk to models or strippers instead.

No, what I think show skaters could really get behind is a luggage endorsement deal. Here that Samsonite? Tumi? Disney On Ice could tell you a thing or two. Holiday On Ice is lugging that suitcase up and down stairs, so they could tell you which bag keeps its wheels from falling off.

For any of you old enough to remember the gorilla vs. the suitcase commercial I bet a showgirl could do more damage. I've seen it when they were thrown onto the train.

You should take 30 seconds to watch the commercial, it will make you laugh, I swear.
So what do you say American Tourister? Got any samples you want some showgirls to kick around? Let me know.

Happy Holiday Shopping!
Posted by Ice Charades at 4:53 AM 2 comments: 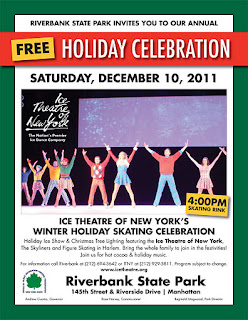 Posted by Ice Charades at 5:13 AM No comments: 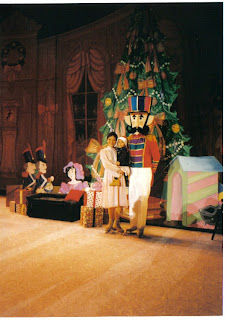 December is here - the season can start! This is every showgirl's favorite holiday. Why? There were and are lots of holiday shows this time of year. Easy to get a job ... sometimes only for a couple months, but it was better than laying on the couch moping.

and I'm sure I'm missing some, somewhere. Let's hope you get to see one before the year is over (or before something like January 8th or so).

Happy Holidays!
Posted by Ice Charades at 8:34 AM No comments: