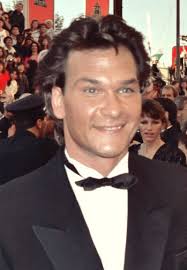 don't you like how his collar is messed up a little?  very endearing

It was ten years (and one week) ago ... 9/14/2009 that Patrick Swayze passed away.  He was an incredible talent and not many knew he was also a figure skater.  Skater you say?  Yes, after actor, dancer, singer, football player and producer.

When he passed, I channeled my inner journalist (having had only one college course in it ... I knew nothing, but hey) and scoured the internet for corroboration of a friend's recollection.  And yes, I determined that he skated for a short time with Ice Charades, but it was never mentioned in any biographies at the time of his passing.

... RIP
A lot of the blogs are associating his role in "Disney On Parade" with Disney On Ice, which is not true. He was the Prince with Disney On Parade, yes, but that was a dance show.
Believe me, I've been knee-deep in Google (pages 8 and 9!) to get to the bottom of it. But good news, Wikipedia - Patrick Swayze has that part right.
What is surprising is I can't find anything on the internet about his time with Ice Capades.
But that is a minor point - what is true about him is that he was clearly one talented guy: actor, dancer, skater, singer and football player to name a few. I love to remember him from the SNL sketch with Chris Farley auditioning to become a Chippendales dancer.
My thoughts are with his wife, Lisa Niemi, of thirty-five years.

I am very sad that I missed the documentary about him that aired on September 18th on Paramount Network.  I would have liked to have seen that.

By the way, my original post about Patrick Swayze on 9/15/19 received more hits than any other post on this blog.  People were far more interested in searching for Patrick Swayze than Ice Charades.  FAR MORE.  And that's the way it should be!