It's time to start thinking of outdoor ice rinks!

I live about an hour away from New York City.  Last Wednesday, I broke down and turned on the AC.  It was 93 degrees.  Two days later, it was 45 degrees in the morning and warmed up to a brisk 55.

Boom.  Made me think of winter.  Then I saw this great article: 45 Best Ice Skating Rinks by Randy Joyceln at the blog Vigourskate and it got me thinking about ice rinks I'd like to skate on this upcoming winter season. 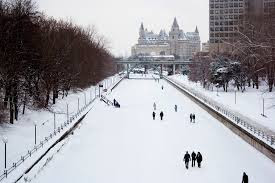 This is my bucket list - hope to get to while I can still skate - skate ... the Reideau Canal in Ottowa.  I probably won't make it this year, but maybe next year.

Russia seems to have some of the most beautiful rinks, but no plans to go.

Anyone out there planning to skate at any of the rinks on this list?  It's international, so there are rinks on almost every continent to consider.

I used to live outside NYC in Stamford, CT. And I really wanted to skate at Rockefeller or Central Park. But that would have meant lugging my skate bag on the train (I don't do rental skates), then either walking with it or a cab ride to said rink. And I didn't have a lot of friends (I had moved there for a job) that would have gone skating with me, so I'd be alone. It was all just too daunting to try. So I never did.

I don't do rental skates either. Good call. I skated at Rockefeller in 1983 on a Tuesday or Wednesday morning. No lines. Not many on the ice ... not a touristy thing to do yet. I got so lucky. I haven't skated there since ... probably won't. I got engaged on the ice in Central Park, so I'll leave that as my last time skating at Wollman. Please let me know if you do skate somewhere outside this year!