Wait! Before you think this is a bad review of Holiday On Ice's world premiere of Speed, that which I railed on and on in my last post .... no. The skating and the choreographer was as good as any show I've seen lately.

In fact, one of the two male principals, Rohene Ward, was amazing. One of the best show skaters I've seen in two decades and the best part of the show for me. 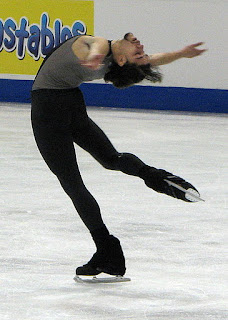 Side note: I just spent an hour watching various You Tube videos of his skating and I'm more and more impressed. He can do all of his double jumps in both directions!! No one I know can do that ... he's the only one I know that could have passed the ISI(A) Freestyle 10. His form is perfect and he spins like Craig Heath. I felt as if I saw traces of the late, great Robert Wagonhoffer mixed with the always great Toller Cranston. Wow, is all I can say.

Okay, okay, back to the review. Like I said the skating was very good. There were no dancers learning 3-turns on the ice as I feared. At one point the entire chorus did a scratch spin. It was a great effect when more than twenty skaters are spinning on every part of the ice.

For this old showskater, it was nice to see the endangered kickline and pinwheel. This show had a very creative take on the traditional pinwheel using either one of the largest props or the thinnest moving stage I've ever seen. It was used during the "Be Italian" number, from the play and movie "Nine", which doesn't make sense of Speed unless there are a couple of Ferraris or Lamborghinis out on the ice. Italy, not known for speed if you're talking government bureaucracy or getting lunch, but heh, it's a catchy song. It was a fun number.

And that is my main beef with the show: the theme Speed didn't hold up in the first half. I give you an example, the Speed of Nature. I know, you're probably thinking cheetahs. No, it was a party on the beach. Nothing says Speed like chillin' on the beach.

But the final two segments, Speed of Machines and Speed of Sport (I think, there was a speed skating element to it) got the audience going. With the lighting, the fireworks and the pulsing music, the show ended with a lot of pow! And my eight-year old thought it was the best thing she's ever seen. So there.
Posted by Ice Charades at 5:15 AM

You should see Rohene's opposite triples during practice sessions.