Did you miss any skating?

This came from a skating club email:

For those who didn't tivo, dvr or video you can watch the world championships without commentary at www.universalsports .com, including Alissa Czisny's freeskate performance that was not televised.

Posted by Ice Charades at 1:28 PM No comments:

Even though it hits 80 - 85 degrees every afternoon since I've been here, I can tell it's spring because new flowers are blooming, the birds are chirping earlier in the morning and the chocolate Easter bunnies have hit the stores.

Where I grew up, spring came after a long, long winter (sometimes not until May) and when it did come, we felt we really earned it!

But all these flowers remind me of Opening Night in an ice show.

In my first ice show, I hinted (okay demanded) that my mom send me a bouquet of flowers for Opening Night, because everyone got them. That wasn't exactly true, but I was sure excited to see the bouquet.

That was the first and last bouquet my mom ever sent to a show - and I did thirteen of them.

In my ninth or tenth show - it is hard to keep track sometimes - I was the only girl in the dressing room of twenty-eight or so that didn't get a bouquet of flowers for Opening Night. I wasn't sad so much as embarrassed.

When my girlfriend and I were joking about it later that night at the dive bar her brother worked in (free drinks from a dive bar are better than no free drinks)one of the bartenders heard us, slipped out back and came back five minutes later with an impromptu bouquet courtesy of someone's backyard.

It was such a nice gesture, although as someone now trying to grow flowers in her own backyard I would be $#%%^@## if they had been taken from me.

But when he handed them to me (with dirt still on the stems) the best feeling I got was that I didn't need them. Skating was my job by then and the flowers were for the time I was new to ice shows.

Okay, fifteen years later, I'm alarmed today at the frequency and size of the "must-give" bouquet to all the students in my daughter's dance recitals. Do they do this for skating competitions? Ice Mom, what's the word? Maybe we can start implying to our kids that the flowers are for the first time and after each concert or competition, the best gift is the performance itself.

What do you think?
Posted by Ice Charades at 2:27 PM 4 comments:

Continuing to go through past posts to see what's going on and came across good news ... Kathryn Bertine has a new book coming out about her quest to get to the Olympics ... in any sport.

Here is her website to update you on all she is doing, including continuing to ride.

You can see the posts I wrote about her here and here. 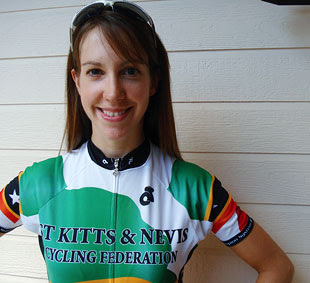 But before hyping her book, "As Good As Gold" that comes out in June, I want to remind you of her book "All The Sundays Yet To Come" about her experience as a show skater.

Spoiler Alert: It's not all fun and games as Ice Charades would have you believe. But it is a GREAT read. You can order it here on Amazon.com.
Posted by Ice Charades at 7:05 PM No comments:

Looks like Oksana Baiul's Cold As Ice originally slated for Broadway after its first run in the Gateway Playhouse in Cliffside, N.J. has gone into hiding.

Does anyone else know more?
Posted by Ice Charades at 11:44 AM 3 comments: 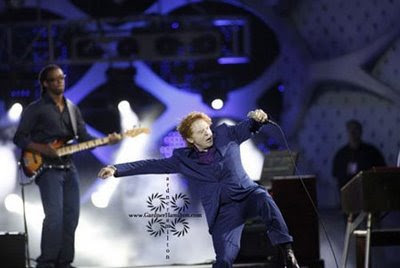 I know he's getting old, but really, he's not falling down, just trying to show some spunk.

Went to a Simply Red concert last night ... and it was ... great! For someone who is already a big fan. If you weren't a fan you might have thought that Mick Hucknall phoned it in and looked old and tired.

No one could argue with those chops though. Even though the backing vocals were pre-recorded (his was the most dominate voice on the track) his singing was live and strong and as clear as ever. Tons of wonderful skating songs in his repertoire -just ask me for suggestions.

This tour is the 25 year Anniversary of Greatest Hits, which meant, no new album to push, which meant we heard all the old tunes we like so much.

It was also nice to see tens of thousands of fans at this concert. I didn't think there would be much a fan base for an eighties British band down here in Juanes land, but the auditorium was packed.

Why am I telling you about this? Come on Ice Charades, does this have anything to do with show skating?

Why yes, thanks for asking.

Back when I skated in Atami, Japan in 1987, we met the band at a bar on our first night off in Tokyo. Okay, okay, I saw Mick Hucknall, just barely, because he was surrounded by models, but we ended up talking to the roadies. I think they lied to us and told us they were warm-up guitarists. All was not lost, I did talk to Janette, the backing vocalist at the time, for a while and she was so nice.

She was getting paid a lot more than I was, stayed in nicer hotels to be sure, but we had similar lives at that time. Backing performers.

While it was a nice coup to crow about who was in the Lexington Queen the night we were there, the Atami cast the year before us, did one better. They met Genesis, the band, and later got to see one of their concerts.

Joyce, if you're reading this, please tell us about your star-studded time with the band!

But here's the rub: being an American/Canadian skater in Japan in the mid-eighties was still a novelty and came with some perks. Perks like free entrance into bars to enhance their reputation. Perks like gifts from strangers or long car rides from strangers going way out of their way. (I'll save that one for another post.)

At that time, you could pretty much slot any "western" foreigner working in Japan into five categories: finance guy, military, missionary, model or English teacher. Luckily, we often passed for models, short models (I could never pull that off in anywhere but Japan).

So Mick, I know you didn't see me waving way up in the nosebleed seats, but it's a safe bet that I was the only one out there last night who saw you in bar in Tokyo 21 years ago. Please give my best to Janette, wherever she is right now.
Posted by Ice Charades at 7:36 PM 1 comment:

All the rumors, especially the one about JoJo leaving after the initial audition, point to the TV show not making it to air.

Unlike the Ice Capades tour being back on, the tv show - which has nothing to do with this Ice Capades - probably not.

Well, at least Scott Hamilton is on the Apprentice. And perhaps, the next Bachelorette will indeed be a figure skater. You guys will have to let me know though, because I don't get a lot of American TV shows here (except for Simpsons, Seinfeld reruns).
Posted by Ice Charades at 5:04 PM No comments:

Ice Capades - The Tour's Back

Update: Yes, those really tall girls are back on tour and coming to a city near you ... that is if you live up in British Columbia, Alberta, or the upper Northwest in the US. They eventually get down as south as San Fran and Stockton, CA in June.

Check out the website and the tour schedule here.

That's no where near to me at this time, so if anyone sees the show, please send a review and I'll gladly post it.

Now I'll be back in a day or two with any update I can get on the Ice Capades Reality Show. Heard anything LakePlacidSkater?
Posted by Ice Charades at 3:57 PM No comments: