... when I was explaining who was and WASN'T going to the Olympics. 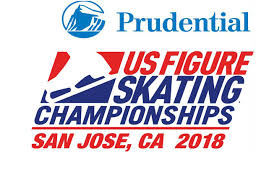 "But wasn't she the veteran on the team?" asked my husband.

And when I started to explain that Ashley Wagner wasn't chosen for the team, I choked up.  I guess watching Nationals with dozens and dozens of my fellow skating fanatics on Twitter will get you emotionally invested.  And I'm not complaining about the skaters who are on the team.  In my mind, all four of them deserve to go.  How about letting Ashley compete in the Team event, since she medaled in it last time?

Just my two cents.  Anyway, my husband and daughter were very concerned that I teared up.  I usually am not so consumed in skating competitions.  I blame you Olympic Channel and Bridgestone Tires!

And it's not easier to explain what happened on the men's side.  Ross Minor getting second place and not being selected?  Again, I'm so conflicted because I really want Adam Rippon there too.

Now I know I'm not going to say anything new or insightful here.  For that you should check out Christine Brennan at USA Today.  She's chockablock with opinions.  If you want a horror show, read the nasty comments following.  I'm so sorry Ashley!

If you don't mind spending hours pouring over  the details, a great source that has EVERYTHING about skating is Rocker - Figure Skating.

And if you just want to feel part of the skating community, join in on Twitter.  It seemed half the people were in the crowd, so I felt I had the behind the scenes insight.  And you know who won Twitter for Nationals?  Gracie Gold.  Yup.  She slayed.

She's whip-smart funny and if she hasn't gotten a literary agent yet I'd be shocked.  Seriously, it's not too late.  Follow her on Twitter in time for the Olympics and you won't be sorry.