So for all of you showskaters working today, give the gal next to you a little pinch and remember to enjoy the day. It will help the hangover. But remember, New Year's Eve is right around the corner.

Posted by Ice Charades at 4:46 PM No comments:

Saw an ice show this past weekend at an amusement park.

There are a lot of them out there right now. Ice shows and Christmas go together like salt and pepper, like peanut butter and jelly, or if you're a fan of Talladega Nights, "like cocaine and waffles." 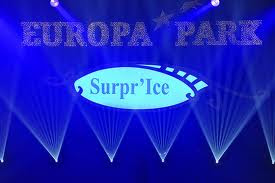 I finally got to Europa-Park in Germany, which was all decked out for the holidays. Europa-Park has a theme similar to Epcot with several countries from Europe sprawled out among the grounds. It was fun to walk from Iceland to Spain in less than five minutes.

So it was in Greece that I saw their Christmas show "Surpr'Ice." I hope that's not a bad omen.

It was a very good show. I loved the most of the music they skated to and the skaters were excellent. But I must be getting old, because my main complaint was that the music was too loud. It's good to have loud music, no doubt, I think it makes you feel more included in the show, BUT not too loud. It was so loud, it was coming across the speakers distorted. OR, that was my eardrums. Like I said, I'm getting old.

But it was the male principal skater that did something I'd never seen before ... EVER. Kind of interesting.

His solo program had no jumps. Tricks - like Russian splits, hitchkicks, and lots of backflips - but NO jumps. Not an axel, not a double axel or triple toe loop which is standard fare for a male principal.

Can you think of a number that you watched where the skater didn't have any standard jumps? He did have two backflips in his solo and a backflip for the finale, so the guy can jump. AND he had excellent spins - including a beautiful flying camel back sit and an interesting position on a sit spin that had a lot of speed.

Almost every skater that can spin that well and throw in backflips to boot, can jump well too. There is no reason to think that he can't.

So why didn't he???? My theory is someone (the execs in the park, the choreographer, or the skater) decided the backflips would be better for the crowd than the jumps.

What do you think?
Posted by Ice Charades at 9:20 AM 2 comments:


Only three days of rehearsal ... how bad can that be?
Posted by Ice Charades at 12:14 PM No comments: