I had to go deep into the comments of a few Facebook postings to get the date.  I'll keep this one updated as more official notices pop up.

But for now, if you're in the neighborhood, that would be Prague, Czech Republic from September 7-10, 2017, there is a Holiday On Ice reunion for skaters.  Still trying to find the location.  Stay tuned ...
Posted by Ice Charades at 9:45 AM No comments:

The Legend is Closing 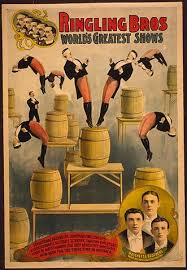 You know by now that Ringling Bros is closing for good, but you may not know you can watch the final show, May 21 - this Sunday - via live stream on Ringling.com.

Here's the link to get you set up.

I saw this show in its last performance in New Jersey and I can tell you one thing I wasn't expecting was sky-high ticket prices.  But I should have known better.  An era is closing.  (And New York ticket prices will be even worse.)   So watching it on-line will be a much better option on the wallet.

Excuse me, Ice Charades, but what does this have to do with skating?

Actually, the last touring show of Ringling Bros includes a Chinese Acrobatic act on skates, thank you very much.  You can see a little of it in the trailer from the link above.  And a few of the clowns skate as well.  So this isn't an ice show, but it's a show with some skating and that should make any skating fan want to watch it.

And don't forget those cute "little" tigers too!

Posted by Ice Charades at 5:53 PM No comments: